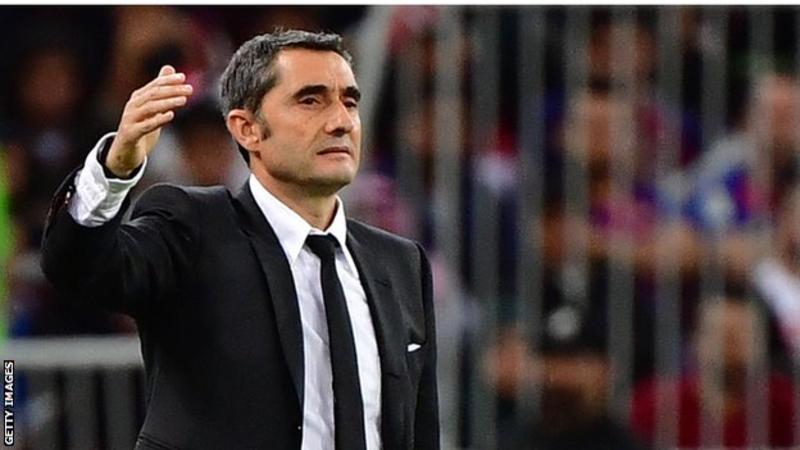 Valverde, 55, helped the club to two successive La Liga titles and they lead on goal difference this season.

However, the Catalan side have produced a series of unconvincing displays under his leadership and have failed to reach the Champions League final.

Setien, 61, led Betis to their highest finish since 2005 and to the Copa del Rey semis before leaving in May.

He has agreed to a two-and-a-half-year deal and will be presented to the media at 13:30 GMT on Tuesday.

In a statement, Barca said they had reached an agreement with Valverde to terminate his contract and thanked him “for his professionalism, his commitment, his dedication and his always positive treatment towards all that make up the Barca family”.

Valverde was under pressure towards the end of last season following the ignominious Champions League semi-final defeat by Liverpool, having led 3-0 after the first leg, and the Copa del Rey final loss to Valencia.

The defeat by the Reds particularly rankled, because it was reminiscent of the collapse at the hands of Roma in the competition the previous season and suggested he had failed to correct a weaknesses in his team.

Valverde did guide the Catalans to the top of the table at the halfway stage of this season, but the fluid displays that fans had become accustomed to during the past 15 years were only sporadic.

Their away form was especially disappointing with losses at Athletic Bilbao, Granada and Levante plus draws at Osasuna, Real Sociedad and Espanyol.

Setien arrives at the Nou Camp as a highly-regarded coach.

After managing lower-league sides, he led Las Palmas to 11th in La Liga – their best finish for 40 years – and enjoyed further success at Betis, where in his first season he led them to sixth place and qualification for the Europa League.

Betis also secured wins over Barca, Real Madrid and Atletico Madrid during his two-year tenure. He left the Seville outfit by mutual consent in the summer.

Former Barcelona midfielder Xavi had been strongly linked with the head coach’s role. He confirmed media reports that he spoke to the club’s sporting director Eric Abidal and chief executive Oscar Grau over the weekend, before he reportedly rejected the club’s offer,.

Other names to have been linked with the club included former Tottenham manager Mauricio Pochettino, who managed rivals Espanyol, and current B team manager Xavi Garcia Pimienta.

‘Setien is a devout disciple of Cruyffian football’ – analysis

The most surprising thing about Ernesto Valverde being fired by Barcelona is that it took so long to happen.

Ever since that earth-shattering night at Anfield in May, Valverde never really looked capable of turning around the team’s pretty aimless path.

Now that task will fall to former Las Palmas and Real Betis manager Quique Setien, who will be fervently focused on restoring the team’s famed fast-paced, high-pressing, incisive-passing style, which had been slowly eroded by the more pragmatic Valverde.

Setien – whose stubborn nature makes him a divisive figure across Spain – is a devout disciple of Cruyffian football, and from now on it is certain that Barca will once again play ‘Barca’ football.

Whether they can play it well, though, is another matter – the ageing legs of Lionel Messi, Sergio Busquets, Gerard Pique and Jordi Alba may struggle to maintain the physical intensity required to make that approach successful, and the coming months will be fascinating test of whether a high-minded football philosophy can still deliver results.