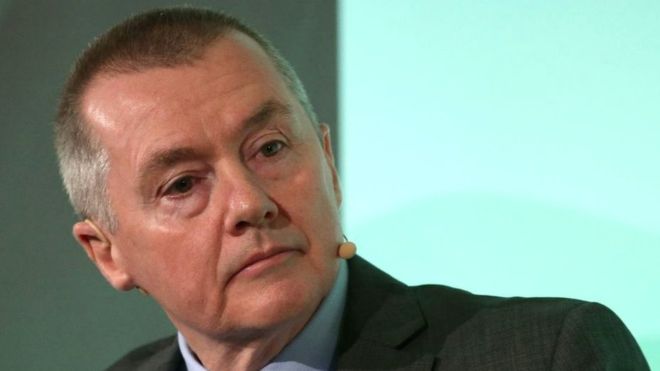 Willie Walsh, chief executive of International Airlines Group (IAG), the owner of British Airways, has announced he is to step down.

He is set to retire as chief executive and from the board of IAG on 30 June.

Mr Walsh said it had been a privilege to have worked on the creation of IAG after British Airways (BA) and Iberia were merged.

Antonio Vázquez, IAG’s chairman, described Mr Walsh as one of the “main drivers” of the project.

Mr Walsh became the British Airways boss in 2005 and is ending a 15-year career with the IAG group, which also controls Aer Lingus and Vueling.

He will step down from the role in March before retiring in June this year.

Mr Walsh said: “It has been a privilege to have been instrumental in the creation and development of IAG. I have had the pleasure of working with many exceptional people over the past 15 years at British Airways and at IAG.”

Willie Walsh is a long-standing figure in the aviation industry. He joined Aer Lingus in the late 1970s as a cadet pilot.

He gradually worked his way up through the ranks to work in flight operations and was appointed as chief executive of Aer Lingus in 2001.

He said: “It is a huge honour to lead this great company. It is an exciting time at IAG and I am confident that we can build on the strong foundations created by Willie.”

Mr Gallego will take over as head of the holding company of British Airways after the airline saw major disruption last year.

For the first time in its 100-year history, BA pilots went on strike in a long-running pay dispute.

In November, dozens of British Airways flights were also delayed or cancelled because of a “technical issue”. The airline also faced a £183m fine in July for a customer data breach.