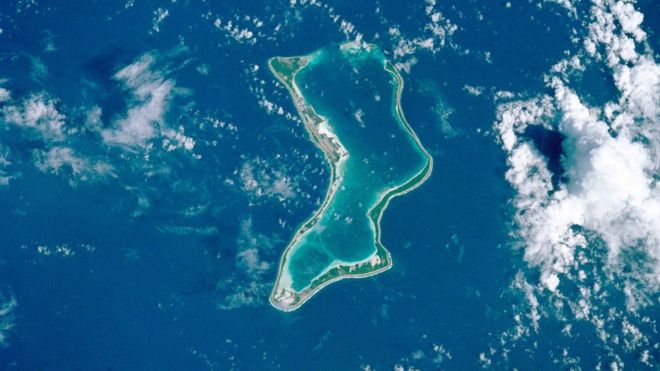 The UK has been called an illegal colonial occupier after it ignored a deadline to return control of an overseas territory to Mauritius.

A UN resolution this year gave the UK six months to relinquish control of the Chagos Islands – but that period has now passed.

Mauritius says it was forced to trade the small archipelago in the Indian Ocean in 1965 for independence.

The UK says it does not recognise Mauritius’ claim to sovereignty.

Britain’s Foreign and Commonwealth Office (FCO) insists it has every right to hold onto the islands – one of which, Diego Garcia, is home to a US military airbase.

“The UK has no doubt as to our sovereignty over the British Indian Ocean Territory (BIOT), which has been under continuous British sovereignty since 1814,” it said in a statement.

“Mauritius has never held sovereignty over the BIOT and the UK does not recognise its claim.”

The Chagos Archipelago was separated from Mauritius in 1965, when Mauritius was still a British colony. Britain purchased it for £3m – creating the BIOT.

Mauritius claims it was forced to give it up in exchange for independence, which it gained in 1968.

In May, the UN General Assembly voted overwhelming in favour of the Chagos Islands being returned – with 116 states backing the move and only six against.

The UN said that the decolonisation of Mauritius “was not conducted in a manner consistent with the right to self-determination” and that therefore the “continued administration… constitutes a wrongful act”.

The resolution came only three months after the UN’s high court advised the UK should leave the islands “as rapidly as possible”.

As the six-month period came to a close, Mauritian Prime Minister Pravind Jugnauth said the UK was now an illegal colonial occupier.

The deadline is not binding, so no sanctions or immediate punishment will follow.

At the time of the UN resolution, the FCO said the UK did not recognise Mauritius’ claim to sovereignty, but would stand by an earlier commitment to hand over control of the islands to Mauritius when they were no longer needed for defence purposes.

Between 1968 and 1974, Britain forcibly removed thousands of Chagossians from their homelands and sent them more than 1,000 miles away to Mauritius and the Seychelles, where they faced extreme poverty and discrimination.

Many moved to the UK in the hope of a better life.

Britain then invited the US to build a military base on Diego Garcia.

US planes have been sent from the base to bomb Afghanistan and Iraq. The facility was also reportedly used as a “black site” by the CIA to interrogate terrorism suspects. In 2016, the lease for the base was extended until 2036.

The UK has repeatedly apologised for the forced evictions, which Mr Jugnauth has said were akin to a crime against humanity.

In 2002, the British Overseas Territories (BOTs) Act granted British citizenship to resettled Chagossians born between 1969 and 1982. But the 13-year window has left some families divided.