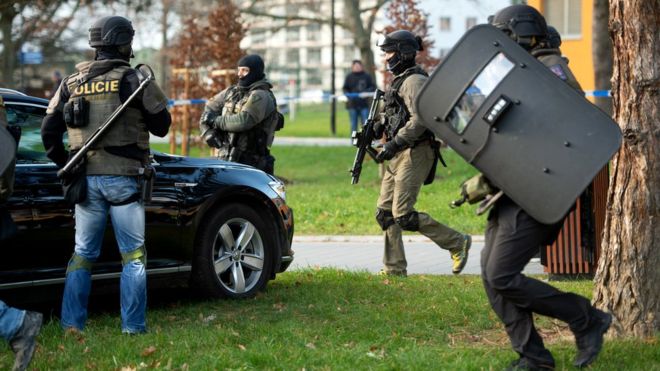 A gunman has killed six people in a hospital waiting room in the Czech city of Ostrava before shooting himself in the head, police say.

Armed police found the suspect dead from a self-inflicted gunshot in a vehicle three hours later.

The gunman was believed to be a patient at the hospital, one unconfirmed report said. His motive remains unclear.

Four men and two women were killed and three other people were wounded, two seriously. All of the victims were patients at the hospital.

The hospital was initially locked down.

A doctor inside the hospital told the Aktualne website that staff had been locked in a hallway waiting for the emergency to end.

Police earlier asked for help in their search for the gunman, but warned people not to approach him, adding that the site in the Moravian-Silesian region had been “secured”.

The suspect had used a handgun and had driven off in a silver Renault Laguna car, according to police. They said they had established the 42-year-old man’s name, had photographs of him and had obtained his vehicle licence plate number.

Police said that once they had obtained pictures of the suspect from security cameras they launched two helicopters to search for him. When one of the helicopters was flying over the car some 5km (3 miles) north of the hospital, the man shot himself in the head and later died of his injuries.

The gun used in the attack was described as a 9mm Czech-made handgun, which the suspect did not have a licence for.

Police initially posted an image of a man they said they needed to trace and said later he was the man behind the shooting, but they later removed the picture from their social media feed after he was found.

Patrols were stepped up at what police described as soft targets, such as schools, shopping centres and other hospitals.

l Democrats in Finland elected deputy leader Sanna Marin as their candidate for the post of prime minister on Sunday.

Aged 34, Marin would be the Nordic nation’s youngest ever leader if confirmed by parliament in a vote likely to occur next week.

“Now we have to look ahead,” Marin said, having defeated rival Antti Lindtman in a party vote. “We have a lot of work to do to restore confidence, but we have a joint government program.”

Having emerged as the largest party in the aftermath of the Finnish election earlier this year, the Social Democrats are able to select one of their own to the post of prime minister in the wake of Tuesday’s resignation of previous incumbent Antti Rinne.

Rinne quit after a key coalition partner, the Finnish Center Party, lost confidence in him and withdrew its support, alluding to a lack of trust.

The Center Party were also critical of the 57-year-old’s handling of a two-week postal strike.

Now the frontrunner to replace Rinne, Marin has previously held the position of vice chairwoman for her party and most recently served as the minster for transport and communications, in addition to her role as deputy leader.

Colleagues of the suspected gunman told Czech media that he had recently gone on sick leave, declaring he was seriously ill. He was said to be a construction engineer who had been treated at the hospital’s haemato-oncology department.

Prime Minister Andrej Babis confirmed that six people had been killed and that the shootings occurred at close range. He cancelled a foreign trip and was preparing to travel to Ostrava, reports said.

The governor of the Moravian-Silesian Region, Ivo Vondrak, said the shooting was “a great tragedy”.

Police said that officers responding to reports of a shooting had arrived at the scene within five minutes. Ostrava is about 300km (190 miles) east of Prague.

Gun attacks in the Czech Republic are rare, although gun ownership is relatively high for Europe because of the popularity of hunting.

In 2015, a man opened fire in a restaurant in the eastern town of Uhersky Brod, killing eight people before turning the gun on himself.

Last week, the Czech government lost a legal challenge to an EU law restricting private use of semi-automatic rifles. It was introduced by the European Union in 2017 after a spate of militant Islamist attacks in 2015.

The government in Prague said the law would do nothing to increase security.