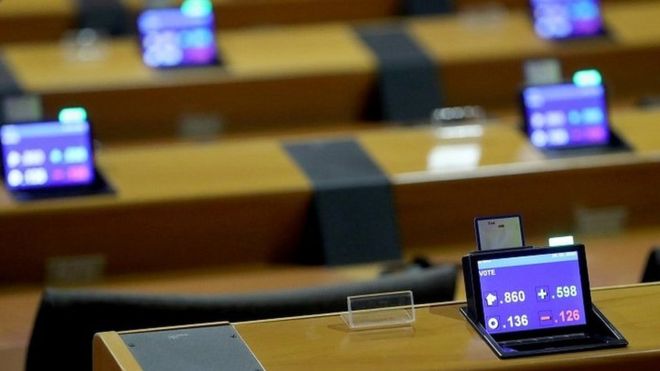 The European Parliament is set to approve the terms of the UK’s departure from the European Union in an historic vote on Wednesday.

The 751 representatives will debate the Brexit Withdrawal Agreement in Brussels before, it is widely expected, giving their backing to the UK-EU treaty.

The landmark session is set to feature valedictory speeches and even music.

It will mark the final stage of the ratification process, ahead of the UK’s exit at 23:00 GMT on 31 January.

The UK participated in its last meeting as an EU member on Tuesday when Foreign Office minister Chris Pincher attended the General Affairs Council.

The European Parliament’s approval is the final hurdle to be cleared for Brexit to go ahead.

However, Wednesday’s session will be largely symbolic. The outcome of the vote is not in any doubt after the Withdrawal Agreement was signed off by key parliamentary committees last week.

The proceedings will be an opportunity for those on either side of the Brexit battles of recent years, including the UK’s 73 MEPs, to celebrate or lament the end of the UK’s membership of the EU after 47 years.ADVERTISEMENT

The debate on October’s agreement, which includes among other things guarantees over the rights of EU nationals living in the UK and British expats on the continent, will be opened by the Parliament’s Brexit co-ordinator Guy Verhofstadt.

Mr Verhofstadt, a former Belgian prime minister, has been one of Brexit’s strongest critics but last week he paid tribute to the UK’s MEPs, saying their “knowledge, energy and wit” would be missed.

Other prominent figures expected to speak include the UK’s Brexit Party leader Nigel Farage, who has been campaigning for the UK’s exit ever since he was first elected in 1999.

After the vote, scheduled to to take place at about 1700 GMT, the UK MEPs leaving their jobs are expected to be serenaded by their colleagues in a special ceremony.