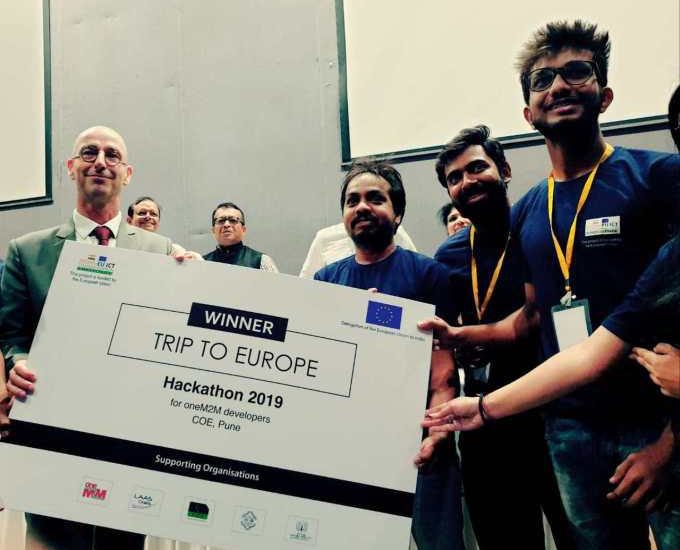 250 teams applied across India. The winning team gets a fully paid trip funded by the EU

16 April 2019, Pune: College of Engineering, Pune hosted a developer tutorial and hackathon from15-16 April using open source implementation of oneM2M and organised by India EU ICT Standards Collaboration Project in collaboration with Pune Smart City. The ‘legacy leavers’ from the MIET, Meerut, Uttar Pradesh won the challenge. The team was led by Sambhav Jain and other three members were Nikita Joshi, Vijay Kumar Sharma and Amit Kumar. The winning team will get a fully paid trip funded by the EU to attend a leading start up event in Europe later during this year.

The winning team developed an advance infusion machine integrated with IoT. An infusion pump infuses fluids, medication or nutrients into a patient’s circulatory system. The proposed solution is useful in diseases like cancer where drugs are too expensive and dangerous; the drop rate can be very easily reliably controlled providing flexibility to a doctor and increased safety for the patient.

The challenges for the hackathon included developing solutions for energy efficiency in smart buildings, pollution monitoring, smart healthcare services, disaster management and women safety using OneM2M based platform, which is a recognized global standard for Machine to Machine communications. One of the highlight of the hackathon was use of real Pune city data enabled through the India Urban Data Exchange Platform provided by experts from Indian Institute of Science, Bangalore.

More than 250 teams from all over the country applied to participate in the hackathon, of which 21 were selected for the final phase. The 21 teams represented the young talent from 10 different states of India with bright ideas to solve challenges of urban life.

Prior to the hackathon, the tutorial on oneM2M was conducted by a team of professors from University of Toulouse, which enabled technology developers and students to build standards compliant applications for Internet of Things for above mentioned challenges.

Benoit Sauveroche, first counsellor at the Delegation of the European Union in India said, “Each time thrilling to see the energy, dedication and enthusiasm of the teams participating in our hackathons. Beyond the prize for the winning team, our ambition is that all participants appreciate the value of working with the oneM2M standard, enabling interoperability and maximising the outreach of their products and services. India is in the process of adopting a transposed version of the standard, and the experience gained through this competition will give the young innovators a cutting edge for the development of smart solutions.”

Manojit Bose, Chief Knowledge Officer of Pune Smart City who was part of the jury stated: “As part of the Smart Cities initiative over 50 environmental IoT sensors have been deployed all across the city of Pune. Environmental data from these sensors was made available for the hackathon through Open APIs from the IUDX connector which has been integrated with the Smart City’s Command and Control Centre. I am very happy that Pune Smart City is the first smart city which can provide its data to citizens to innovate and this hackathon is first such hackathon to provide an open innovation platform to students all over the country.”

Bindoo Srivastava from Telecommunications Standard Development Society, India (TSDSI) said, ‘Pune hackathon was the first in this series, where participants had the unique opportunity to integrate solutions developed by them on onem2m standards with real life data provided by pune smart city. It was evident that the applications, having been built on a standards based architecture, can be tailored quickly to serve problems in different domains.’