The Council of EU Chambers of Commerce in India conducted its 28th Annual General Meeting on Friday, October 16, 2020 followed by Panel discussion. 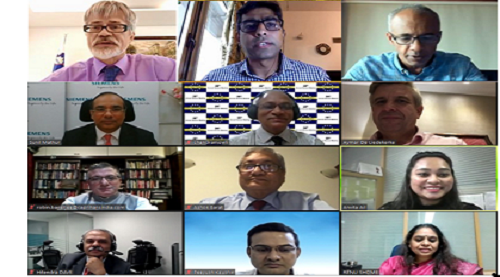 On the occasion, the Panel Discussion on “CHANGED BUSINESS ENVIRONMENT: GLOBAL EXPECTATIONS AND LIKELY RESPONSES” was organized and was attended by Council’s members, Governing Board Members, Past Presidents, EU & non EU Diplomats, industrialists and bureaucrats.

Mr Ashok Barat  initiated by thanking all the participants and said Chamber’s inspiration are its members, the EU Delegation, the Consular Corps, representatives from the Government, various guests, thought leaders, media, critics, Past Presidents, Members of the Governing Council, Director and staff and numerous intermittent connects.

He started off by highlighting on the many inflection points and events of great significance – the birth and the growth of the EU, the transformation of India post liberalization and economic reforms and emergence of the new entrepreneurial India – to which EU chamber has been witness to it.

He drew attention to the fact that it was felt that creating and developing a relationship with this new block of nations required a focused chamber and that the hopes and promises have been addressed in great measure. There is always a lot more to be done and the EU Chamber is determined to do so.

Further, while elaborating on the underlying philosophy behind the creation of the EU Chamber. He said that traditionally, most chambers have two major roles cut out for them – (a) policy support and advocacy and (b) promotion of trade and business. The founders of the EU Chamber without ignoring these two fundamental tenets, added very wisely a third dimension – “incubator of relationships”.

Mr Barat believes that this chamber would be remembered more very proudly so, for having taken long term view on nurturing relationships and providing a steady platform for growing trade and commerce on the principles of trust and confidence.

He stressed upon the fact that the presence of His Excellency as our Guest of Honour this evening is a testimony to our determined approach to build relationships with those nations in the EU who have not had a large presence in India so far, but in whom we see a great opportunity ahead. It is not to say that we do not engage with the other nations. Our engagement with them is as resolute and continuing, as it has always been.

He underscored the fact that we owe to the members of other EU nations who have had long association with and presence in India. We have rightly incubated and well nurtured these relationships too!

Mr Barat thanked one and all and requested them to engage with chamber intellectually with their thoughts, leadership, ideas, suggestions and most importantly criticism, and to participate in the Chambers bright future.

Concluding, Mr Barat spoke about  Dr. Pramod Chaudhary who is the Executive Chairman of Praj Industries a patron member of the Chamber. And, Mr Chaudhary is the first Indian who have recently been given the prestigious George Washington, Carver award 2020 for a stellar contribution in the area of bio impact.

H.E Dr. Marjan Cencen, shared few of the measures, which were adopted by Slovenia during the initial days of Covid19 crisis.

Since  2nd April Slovenian parliament adopted the several intervention act to mitigate the effects of the epidemic.

On September29, Slovenian government adopted a proposal for the fifth intervention package, approximately a 420 million Euro, the proposal reflected the economic forecast, which were more optimistic than those in the spring.

H.E Dr. Marjan Cencen underscored the new high-level trade dialogue agreed during the latest EU India summit is an encouraging step toward this goal. The key development challenges ahead are strengthening support for research, innovation and digitalization to increase productivity, green transformation and systemic adjustment of social protection due to demographic trends.

COVID-19 represents a challenge of our lifetime, like the climate change, the virus transcends the borders. He concluded by stressing the need to work together, fighting the virus is changing societies and economies to a new normal.

Panel discussion saw eminent personalities sharing their thoughts on business environment in given times of pandemic and how countries like India can be more competitive and strengthen their strengths in-order to face global competition to be next manufacturing hub of the world.

Here , are the excerpts of Panel discussion :

Mr. Sunil Mathur expounded to the fact while the world is anxiously awaiting an effective COVID-19 vaccine that can be readily distributed until then the priority is to reenergize organizations to act rather than react. He exuded confidence that here in India, which has been a front runner in a lot of these areas- E commerce, IT etc will yield positive returns on investment and payback periods.

Mr. Chandramowli Srinivasan while moderating the panel discussion how  the pandemic has changed a few of the feelings towards China in different countries and therefore, ask the panelist, whether  we go back to being as usual once the COVID crisis passes over.

To this Mr. Aymar responded that China, always have a very long-term strategy and  we are just in the middle of the game and, we know what they have done up to now, but, we may have difficulties to understand, understand exactly what is the final targets. This trade battles and the way the change is potentially very interesting in the short-term. The big change will come through, resilience, sustainability, circular economy on which people will be measured if they’re successful or not.

Mr. Hitendra Dave explained China is responsible for the cost of capital collapsing, the way it has, because it exported so much of deflation around the world.

Mr. Robin Banerjee clarified that China came into the world as a make or buy decision. The countries have realized that they have, they cannot depend upon one country, which is China to source their material.

Mr. Peeyush Kaushik echoed what Mr Hitendra also talked about source of information and digitalization by force, that’s a crucial thing to learn that digitalization is not an option now. Aymar mentioning about coming out of COVID and from that perspective how they could get 80 to 90 percent people working from home.

Mr. Manish Bhatnagar, the then President elect thanked everyone and said they all had wonderful session last one hour or so. Ashok, I accept the honor of, following in your very big shoes, as difficult as it is to fill them, but, the way you talked about the history, the legacy, the purpose of the EU Chambers and educating us, I really liked the way you spoke about nurturing incubating relationships. And we saw that team in multiple different ways through Sunil’s talk and Amit’s talk and we will also to continue doing that because as we all know, relationships are the key to success in many, many ways.

Mr Manish Bhatnagar  appreciated Mr Barat for the leadership of the EU chambers. And expressed to look forward to keep having Mr Barat  informal guidance in the next years to come.

Going forward, Mr Bhatnagar articulated the specifics that  Ambassador Cencen shared regarding Slovenia’s response to the pandemic. He assured of the role that EU chambers offices  will play to fast track collaborations -in supply chains, education digitalization that Ambassador highlighted between India and the EU.

Dr Renu Shome made the presentation of the various activities conducted during the year and how Chamber played pivotal role in strengthening the EU India bilateral relations and helped its member companies to take their business to further heights.

She proposed the vote of thanks and expressed her gratitude towards all the speakers and participants.

He also thanked the sponsors for making the event successful: