The Council of EU Chambers of Commerce hosted a farewell Meeting in honour of Dr. Joao Cravinho, Ambassador and Head of the Delegation to European Union on July 20, 2015 at the Yacht Club, Mumbai. 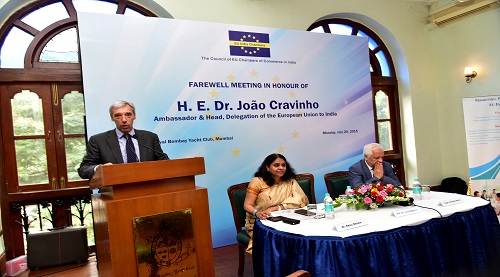 Capt. Avinash Batra in his welcome speech talked about the remarkable achievements of Ambassador made during his tenure in promoting and strengthening the good friendship and mutually beneficial development cooperation between EU and India.  He said your Excellency you will always be remembered for the invaluable services and selfless contribution you rendered in many different ways which have not only benefited our country but have also contributed towards enhancing a better social life.

Capt Batra praised Dr Cravinho and said he was a source of inspiration with his positive attitude and NEVER SAY NO attitude towards new and challenging ideas and activities which have made us achieve the targets.

He wished him and his family a very happy and healthy life and also congratulated him for his new assignment as Ambassador & Head, Delegation of European Union to Brazil.

Dr Joao Cravinho started his speech by stating that it been a wonderful experience in the city of Mumbai. It is the city which has always given me immense pleasure. I appreciate Mumbai city from my bottom of my heart. It is not really a good bye but it is more of an emotional farewell.

The relationship between India and EU are very much solid. Euro was fluctuating and that has impacted the Greece economy significantly. Market of European capitals was volatile. The exit of Greece from Eurozone was economically and financially important. The stock of markets of European capitals was volatile. So there was nothing significant in the market so that means as far as market are concerned Eurozone has fear of invasion.

India has all the potential and conviction to grow in decades in future. The issue was not so financial. The issue was in fact was much political. That’s why I would like to underline the most significant fact about this decision.

I would like to focus on couple of words on European Union and Mumbai. My views about this country has been very friendly and about EU is that we are in an excellent position now to ensure EU Mumbai is an very important part of the story and I am very optimistic about the EU India story.

I would like to take the opportunity to pay homage to the city of Mumbai and to the people and the institutions of Mumbai. Its been pleasure working in the heart of this city over the years of my tenure. I look forward to meet at Summit in Brussels with the present Prime Minister of India Mr. Narendra Modi. We expect EU Mumbai to be very important part of this Summit.

I am also very optimistic and bullish because there anything can go wrong, but I also believe there are many more things which can go right as well about this long awaited EU India trade and all the discussions that has taken place has all been positive. Late in months’ time there will be a meeting between the chief negotiator and in order to take up and pursue these issues. The decision makers look at the benefits against the cost of the EU India trade deals. The benefits are very significant. Of course, for the politicians the benefits looms over large.

India has great potential and greatness and I am very optimistic this trade deal between EU and India will be a great success. I believe the European companies in India will make a significant contribution. The EU India trade deal will be a major factor in creating this.

I would like to pay homage to Mr. Narinder Nayar and particularly Mumbai First. This wonderful institution has interacted with such pleasure and benefited for EU Mumbai relations. This institution exemplifies the best of civil society. The institution proposed and mobilized distinguished members of civil society.

I would like to pay homage to Capt. Avinash Batra and Dr. Renu Shome and Federation of EU Chambers of Commerce in India. With them, I have celebrated Europe Day for the last 4 years. Europe Day is celebrated every year in the month of May in the city of Mumbai.  It has been a wonderful moment for me to contact with business elite of this city and it has been a moment of personal pleasure and also an important network.

I would like to say that European Union will be an important part of India’s success story. It only underlines how important it is for European businesses to come together in the EU Chambers of Commerce and to come together in the discussions of things that are important in their work. India will be going through the deepest transformation and voices of the European Union will be contributed very effectively and very positively through that transformation. It is fundamentally important for EU businesses to be talking to each other to be networking to each other in their Chambers of Commerce in the Federation of Chambers of Commerce and institutions such as EBG. Its time to say to European businesses to come together and work together and think together and voice your views because that will strengthen EU India relations and also strengthen the transformation and potential of India.