The Council of EU Chambers of Commerce in India in association with Embassy of Bulgaria in India,World Trade Centre and All India Association of Industries organized the Indo-Bulgarian Business forum on January 21st, 2014 at the South Lounge of the World Trade Centre in Mumbai. 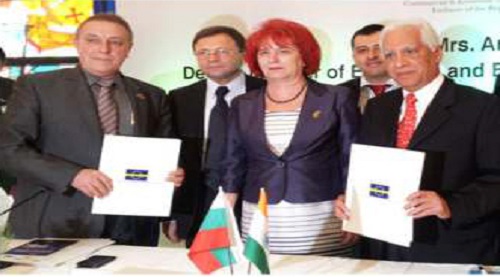 The forum was organized by .  The forum saw participation from a large number of Bulgarian and Indian Companies representing varied sectors like infrastructure, Information technology, Energy and electrical, food processing, etc. The 16- member delegation was led by led by Her Excellency Mrs. Anna Yaneva, Deputy Minister of Economy and Energy of the Republic of Bulgaria.

Capt. Avinash Batra, The President of the Council of EU Chambers of Commerce spoke on the opportunities for cooperation. He welcomed the delegation and the other business representatives present at the event and expressed his delight at being at being present at the event. He said that The Council of EU Chambers was one of the foremost trade promotion organizations in India established in 1992 to promote, foster and extend commercial and economic relations between India and the EU.  Since its inception the chamber had grown in its reach and has expanded extensively and we are committed to promoting relations and partnerships between the EU and India.

He remarked on the Chamber’s membership and the extensive activities carried out in the recent past such discussion on FTA, A dialogue with EU parliamentarians and the Renewable Energy Conference. He also touched upon the forthcoming events organized by the Chamber like the Conference on Biotechnology, Europe Day and the proposed delegation event to Europe in 2014.

He said that Indo-Bulgarian relations have traditionally been very close and friendly and that the trade turnover between the two countries in 2012 was $140.2 million. Further there were several sectors in which India and Bulgaria cooperate. Both the countries have also partnered in tourism, defence, taxation, science and technology among other sectors through signing of Bi-lateral agreements. Also Indo-Bulgarian trade involves sectors such as electrical, infrastructure, metals, etc. and needless to say there was tremendous potential for growth.

The Council of EU Chambers of Commerce and the Bulgarian Small trade Promotion Council signed a Memorandum of Understanding to further strengthen the ties between the two partners.

Mrs. Anna Yaneva, Deputy Minister of Economy and Energy of the Republic of Bulgaria said that it was a great pleasure to attend the forum and expressed her special gratitude to the Indian organizers, as well as to the Bulgarian embassy in New Delhi.

She hoped that the forum and meetings will facilitate the start of real business partnerships and joint projects. She commented that India is an important and strategic partner in the Asian region and attempts are being made at intensifying and expanding the bilateral trade and economic cooperation

She also said that Bulgaria is one of the countries that successfully coped with the challenges imposed by the crisis and maintained positive growth rates despite the complicated economic situation and that there was  a positive trend in the development of the export. Bulgaria was trying to encourage exports to India concerning Bulgarian products of high potential for presence at the Indian market, like engineering products and high-tech machines and facilities.

She spoke of the economic and strategic aspects of Bulgaria such as having the lowest taxes in the EU and being an important transport hub between the markets of the EU, Middle East, North Africa, Russia, and CIS countries.

She concluded by saying that she hoped India and Bulgaria would forge new ties and that the Indian companies are always welcome to do business in Bulgaria.

Mr. Vijay Kalantri, President of the All India Association of Industries thanked everyone for the support extended towards the event. He remarked that Indo-Bulgarian trade had a bright future and a long road ahead. He praised the architectural and natural beauty of the country and said that it was one of the finest countries in the world. Bulgaria has a thriving IT industry and was highly developed technology sector in which there could be further cooperation. He welcomed the entire business delegation and wished them the very best in their future ventures here.

The meeting was concluded with B2B meeting and a networking session among the companies.