The Council of EU Chambers of Commerce in India organised the “Presentation on Trade and Investment Opportunities in Ireland” on 9th October at Y B CHAVAN CENTRE, Mumbai. 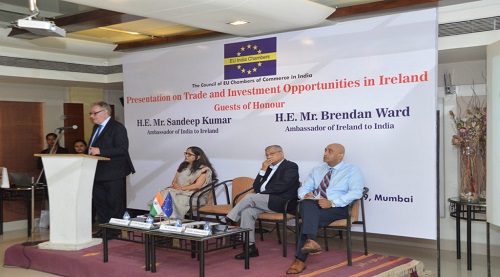 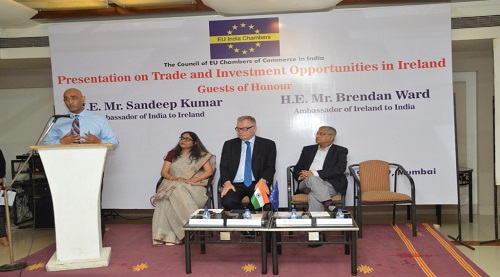 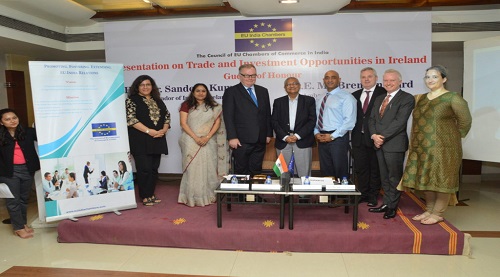 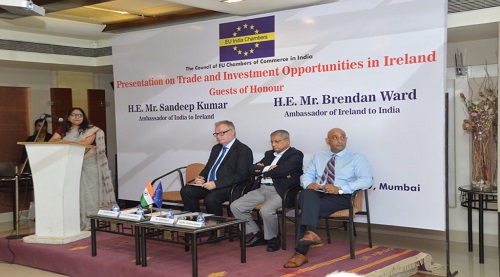 Speaking at the event Mr. Ashok Barat, President of EU Chambers said India and Ireland have  cordial and long term relationship and we hope the relations will further strengthen in the coming years. He also stressed on the need to encourage Irish Business in India and said this is a rare opportunity for the Chamber to host both the Indian Ambassador as well as the Irish Ambassador together .

Dr. Renu Shome, Director of EU Chamber, made a presentation on the Chamber’s activities and the crucial role played by the Chamber  in promoting the business between European nations and India.

H.E. Mr. Brendan Ward thanked the Chamber for organizing the meeting and said  many Indian and European Companies are choosing Ireland as their base and presently there are many Indian companies are acquiring Irish Companies.

The major sectors for foreign investment include IT where many Indian Companies are operating and many Indians have chosen to make a career in Ireland with these companies. Pharma, Life sciences and Healthcare are also very important in Ireland just as it is in India”.

H.E. Mr. Sandeep Kumar complemented by adding that Ireland has more possibilities and opportunities for trade, Business, Investment and Technology. “Today in all foreign services the focus is economic diplomacy and that is why we both Ambasadors are here to interact as it is our Prime Minister and their Prime Minister’s vision to  reach out to the business and not just the top level business but most in the region of SME where we can offer possible support. He also said that Mr. Ward was just being generous by not mentioning that Ireland is one of the safest country in terms of doing business and living there.

Companies present introduced themselves and also interacted with Ambassadors .

The meeting ended with High-Tea.