Dr. Renu Shome, Director, The Council of EU Chambers of Commerce in India welcomed all the speakers and panelists. She briefly spoke about the Chamber and the services offered by the Chamber. 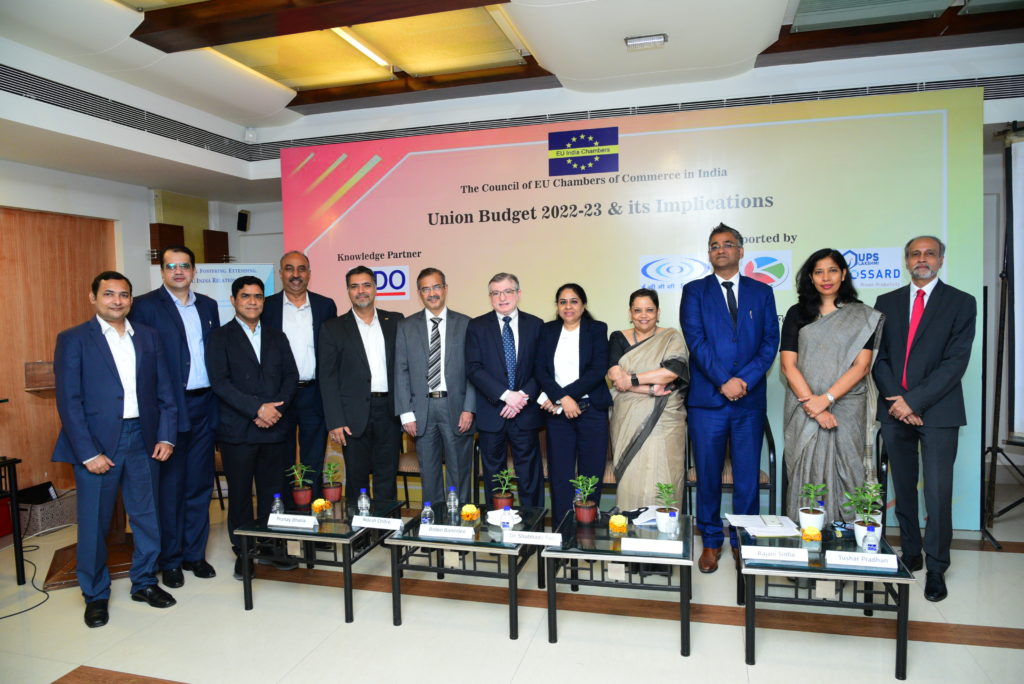 Mr. Robin Banerjee mentioned that massive capital expenditure is positive side of Budget. The budget is a supply push budget and not a demand-pull budget. Essentially a market has 3x to 5x multiplier effect which means if your expenditure is 100 Rupees in a period of 3 to 4 years you get 500 Rupees. On the other side, the rural development budget was around 2,06,000 Crore, that amount is been not increased. First thing in it is MGNREGA; the allocated money is less as compared to last year. The allocated money is less because there will be trickle-down effect from the capital expenditure.

GST is a VAT regime, where output taxpayer is setting of input tax, and when output taxpayer sets it off the output, taxpayer assumes that the input tax person has paid the taxes. He mentioned that unfortunately India is not a compliant country, inspite of all the regimes India was 65% compliant, two third of the country was compliant and one third non-compliant, black economy. He further mentioned that under the GST regime, according to his data, 90% of the economy is compliant and 10% not compliant which means now more and more people are been brought under the GST tax net. The GST collection has also increased from 1, 00,000 Cr per month to 1, 40,000 Cr per month, which means our economy is becoming more compliant. Regarding the Input tax regime, we have seen that every 15 days there are news about fake GST invoices. Which means someone has issued the invoice and some other person has taken the credit, therefore thousands of money was taken on credit. For this, if supplier is not compliant the buyer bans purchasing from him and becomes more compliant.

Dr. Shubhada Rao shared her views on key challenges to achieve 8% growth. She mentioned that it is doable because current budget has quality of expenditure. It has been a key focus, if we have a look for capital expenditure to revenue expenditure ratio it stands almost a 2-decade high. Capital expenditure is important because it will expand the economy, create jobs and therefore consumption will turn more durable. The job creating sectors have allocated more as compared to the other sectors, which helps the economy to achieve this estimated growth.

Dr. Rao also spoke about the gap in Total expenditure and total receipts other than borrowings. She mentioned that almost every country measures its budget deficits, this helps every government sponsor expenditure typically in public goods, infrastructure, developmental programmes, subsidies etc. this means expenditure exceeds your revenue. On the revenue side you have tax revenue, non-tax revenue and non-debt capital receipts, the other side is expenditure. Since this year, the expenditure on capital is more the consequence is we will have more revenue expenditure. The financing of fiscal deficit in a large country like India takes place by domestic sources of financing and about a small part is the external financing. Domestic source has three four items of which government borrowing programme is the largest one by which the gap can be filled.

Mr. Nilesh Chitre, spoke about Ease of doing business. Firstly, he mentioned that digitization of buying and selling of property is one of best thing that has happened. Second is the Logistics inputs efficiency for competitive advantage of India, logistics costs are very high, to improve logistic efficiency, railways play a key role. He also spoke about government procurement. Government spending is increasing, especially for MSME’s who are participating in government they are doing with bank guarantee or at least with an assurity bond.

Further, he spoke about impact of taxation on multinationals, he mentioned that this year there were no changes in taxes as such. Multinationals are expecting certainty for the amount, which has to pay in the form of tax. In addition, the biggest issue that we face is transfer pricing, on paper it is borrowed from OECD but in reality transfer pricing happens.

Ms. Rajani Sinha mentioned that government has been announcing many measures for easing the supply side of the economy by investing in infrastructure, incentives for manufacturing sector, liquidity support. This supply side measures expected to yield long-term benefits.  On the demand side, some immediate push might have helped. Because household demand is been impacted by the pandemic and consumer sentiments are low, therefore any kind of demand stimulus might have helped and grant relief.

In addition, while speaking about Real increase in capex she mentioned that if we see capital expenditure to GDP ratio budgeted for FY23, it is 2.9%, and it is much better than what we had in Pre- Pandemic period. If we compare capital expenditure of FY23 to FY22, there has been a growth of 25% and that is because of infusion into Air India. If we include that then the growth can be around 35%. But there is a caveat here, the capital expenditure from Internal and Extra Budgetary Resources (IEBR) which is capex done by various ministries through their borrowings and savings has reduced. The key segments targeted for capex are Roads and railways, and even Telecommunication sector.

Mr. Tushar Pradhan spoke about expectations in terms of changes in repo. He mentioned that as correctly said by Dr. Rao, global rates going up is going to affect us as well. We are expecting 2-3 hypes. We will end up at 4% reverse repo and 425 VRRR. We are expecting a gradual increase and we are actually going up.

He further shared his views on budget. There is sharp fall in GDP, Tremendous decrease in production and at the same time huge increase in cost. The health infrastructure cost, cost of supporting the entire banking system, moratorium offered during the first lockdown. The best thing about budget is you can go in two ways, if you feel 6.9% is too much we can contract it at the same time the economy is going in forward. The other way would be pumping private; we can just incentivize to increase the demand in the economy. This budget has taken a middle path, and the thinking process is great was mentioned by him.

Mr. Sonal Verma, spoke about export credit guarantee fares vis-à-vis blanket moratorium. He mentioned that based on whatever numbers were coming on ministry of commerce post the budget, investment in ECGC was 4000 crore which is less compared to last year. Last 2 years have been very difficult and there had to be some impetus from the government side putting on the credit line, which was done by government. On the interest equalization scheme the government has allocated a good amount that is a good thing for export community.

While speaking about impact of the proposed budget on business environment with the EU he mentioned that, we are leading a change of thought process in India. One thing that should excite the EU Companies in the short term to medium term perspective is PM GatiShakti project, the outlays put for roads, trains, airports, infrastructure etc. The completely paperless E- bill, which the government is trying to design, will take care of the corruption and let the EU companies invest in more public and private projects. Also with One Nation One Registration scheme, India looks to be very independent and attractive with lesser human dependency to invest.

Mr. Tushar Pradhan, mentioned that we should not forget that it is a currency, and currencies are valued, perceived, exchanged for some other currency rate. Today the highest value currency is US dollar, because all the benefits it has. Today we don’t know the demand and supply, we are just speculating on demand. Agreeing to Mr. Banerjee he also spoke about why we want to bypass the central bank system.

Mr. Sonal Verma, people are operating in crypto currency because it is a 24/7 wallet and people can directly do a transaction from an INR wallet move to Ethereum and then in any currency which is not tracked. Further he also mentioned that this is a grey area when I have to pay tax, because wallets can be moved so easily and encash them in any currency.

Mr. Pranay Bhatia, moderator of the session shared is thoughts. Firstly, he mentioned that Gen Z. owns around 95% of the crypto currency in India.  Secondly, today I have a Indian currency under RBI regulation I am allowed to buy dollars. I buy 10,000 dollars, then whatever rate fluctuates accordingly when I invest 10000, I invest at 6 lakh, I get 7, 50, 00 Rupees. Now 1, 50, 000 is not taxable. RBI says you brought currency, you invested but it is not taxable. However, the same thing when I do in Crypto it is taxed at 30%, and if I incur a loss on the same crypto I am not allowed the loss deduction, but my income will be taxed at 30%.

Subsequently, the experts answered all questions curated by the moderator Mr. Pranay Bhatia.

Mr. K V Bala, Chairman, Indus Finance Ltd. and Member -Governing Board, The Council of EU Chambers of Commerce in India summarized the session and thanked the Panelists.