The Council of EU Chambers of Commerce in India has organized a webinar on “Professionalization Of Family Business: 5cs Of Inducting Non-Family Professionals To Family Business Held On July 29, 2021 along with Gateways Global Human Capital Solutions LLP 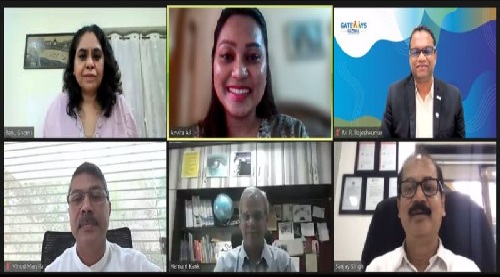 Dr Renu Shome, Director, EU Chambers welcomed the attendees and initiated the subject by stating this topic is interesting both to academia as well as entrepreneurs alike.

What is more remarkable is that inspite of the fact that huge quantum of work done on the subject, in terms of theorizing various aspects of family managed business—be its conceptualization, its incubation, decision process, culture, transition, growth stages, financing, management.

The demand for more knowledge inputs on the subject has not mellowed.

The reason for such phenomena could be the  success stories associated with the structure, changing societal and business environment,  growing understanding of the more formal business education and practices, regulatory and other business advantages and disadvantages.

The session was presided over by Mr. Rajesh Kumar, who first spoke about what professionalization of family business means and how it can help in transformation and progress. He then spoke about professionalization from three angles; self, business, and family. He mentioned that during the initial phase, the control process and systems are informal and are based on trust. With the help of the Four Room Model, he threw light upon how from centralized decision making and paternalistic culture the organization moves towards formal strategic planning and control mechanisms. He also recommended the 5C approach for the majority of the businesses which are in stage one or stage two of the businesses. The first and foremost thing that he recommended was to create consensus among the family members, then bring in clarity like what and how much has to be done, engage and communicate with each other, and the most important is to educate and grow collectively. Further, he concluded by explaining how progression of the business from simplicity to entrepreneurial management is the essence of professionalization.

Mr. Vinod Manjila gave a vivid outlook on the journey of his family business. Mr. Vinod shared some key points on how the business is dependent and can excel on three things, trust, travel to gain invaluable knowledge and experiences. Further, he spoke about the inspiring journey of professionalization touching on a few points like financial planning, bringing new professionals to the business, and induction of a new generation.

Dr. Sanjay Singh talking about his company mentioned that his company was established in 1999 and has been a pioneer in the field of biotechnology, the native anthesis – human biological fluids which are difficult to develop and manufacture. After successful commercialization of the antigen business, he also spoke about the journey of further expanding the business to stem cells which gave a flagship to India.

After that Q&A session was held wherein a lot of insightful questions were asked by the attendees on the decision-making process, updating the business strategies smartly and quickly.