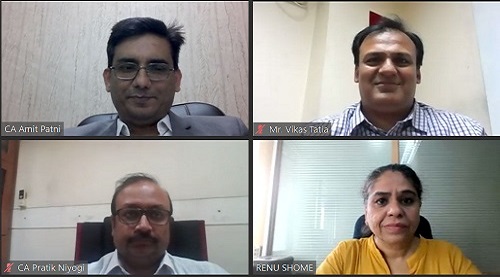 Dr. Renu Shome welcomed all the attendees and the speaker. She introduced CA Patni and very briefly educated the attendees about the activities of the Chamber.

Giving a background of the topic he mentioned that it is important to understand while making payment to a foreigner whether the payment is subject to Tax or not. He explained the meaning of royalties under Tax Treaty and under the Income Tax Act.  He further added that Royalty is taxable at 10% on gross u/s 115A if received by a non-resident from a resident and Non-resident does not have a PE in India. Royalty is taxable at 40% on net income basis under 44DA of Act if non-resident has a PE in India and the right/ property/contract in respect of which Royalty is paid is effectively connected with the PE.

He explained the meaning of Copyrights and highlighted certain provisions of copyrights which were used extensively by the Supreme Court. He also said that for software also the Copyrights Act 1957 will be applicable. He gave a background of the Supreme Court Judgment. He mentioned that the issue before the Supreme Court was that whenever there was a payment by resident Indian end users or distributors to non-resident computer software manufacturers/ suppliers for the distribution/use of computer software it can be characterized as royalty under section 9(1)(vi) of the Income Tax Act 1961 and the Indian Tax Treaties thereby requiring deduction of TDS under section 195 of the Act. The facts that were before the Supreme Court was that the distributor is granted a non-exclusive, non-transferable license to resell computer software. No right has been granted to sub-license or transfer, nor is there any right to reserve engineer, modify, reproduce in any manner otherwise than permitted by the license to the end users. What is paid for by way of consideration by the distributor in India to the non-resident manufacturers or suppliers, is therefore the price of a copy of the computer program as goods. The distributor does not get the right to use the product at all. The end user can only use the computer program by installing it in the computer hardware and cannot reproduce the same for sale or transfer i.e. no act contrary to the terms imposed by the EULA. The license granted vide the EULA is not a license in terms of Section 30 of the Indian Copyright Act 1957 but is a license which is imposes restrictions or conditions for the use of the computer software.

The Supreme Court has upheld the principle that once a DTAA applies, the provisions of the Act can only apply to the extent that they are more beneficial to the assessee and not otherwise. Further, where any term is defined under the DTAA, the definition contained in the DTAA itself has to be looked at. The SC has reaffirmed the position laid down in the case of GE Technology Centre Pvt. Ltd. That the machinery provisions of TDS under section 195 of the Act is inextricably linked with the charging provisions as a result of which, the TDS obligation arises only when the sum is chargeable to tax under the provisions of the Act read with DTAA. The SC has rejected the revenue’s reliance on the decision of the SC in the case of PILCOM on the basis that the same was in the context of Section 194E which does not have any reference to payments being chargeable to tax under the Act. Further, the SC has also rejected the argument of the revenue that some of the EULAs term the transaction not as a sale but as one of licensing. The SC has noted that it is a settled law that in all such cases, the real nature of transaction must be looked at by reading the agreement as a whole.

He further mentioned that the SC has noted that the list of appeals are concerned with DTAAs among India and 18 other countries which are based on the OECD Model Tax Convention on Income and on Capital, wherein the definition of royalties is substantially similar to that of the OECD Model Tax Convention and that the definition of royalty under the DTAA is exhaustive as it uses the expression ‘means’. The term royalties refers to payments of any kind received as consideration for the “use of, or the right to use, any copyright” of a literary work. Having noted the above the SC has held that the transfer of all or any rights as mentioned in the CA is a sine qua non for the payment to qualify as royalty.

There was discussion in the judgment that OECD commentary should not be used in order to interpret the treaty positions because the government had already raised its reservations against the commentary on some of the areas. So we need to focus also on the reservations imposed by the government and not simply rely on OECD commentary. This proposal was rejected by the SC. SC has made a note of the CBDT Circular No. 10/2002 dated 09 October 2002, which prescribed the format for the certificate to be issued by a Chartered Accountant while making foreign remittances wherein a distinction has been made between payment towards royalties and payment towards computer software which is taxable as business income.

He concluded by saying that with effect from April 1, 2020, an EQL @2 % was introduced on goods supplied/ services provided/ facilitated by non-residents to India through an electronic platform. A proposed amendment this year states that only those payments which are otherwise not taxable as royalty or fees for technical services, shall be subject to the EQL. Since software license fee is not taxable as royalty now, it should be examined whether the same could be subject to the 2% EQL.

The Webinar was followed by a Q&A session.