The Council of EU Chambers of Commerce in India organized a webinar on “The New Labour Code- the change one should know” on April 6, 2021. 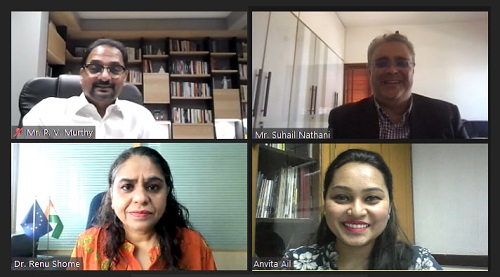 Mr. Suhail Nathani, Managing Partner, Economic Laws Practice briefly introduced the topic to the attendees. He mentioned that one of the last bastions to fall in the regulatory reform landscapes in India is the labour legislations. Some of them date back to 1926, and the law has certainly not kept up with the realities faced by Indian enterprise today. Through 4 acts (hereinafter referred to as the ‘Labour Codes’), notified on August 2019 and September 2020, the Government of India has set the stage for a landmark reform in the Indian labour law landscape. 29 separate labour laws will make way for 4 new acts comprising a modern labour code which is designed to improve the working conditions and wages of labour and enhance the ease of doing business in the country. As is the case in all such structural reforms, enterprises need to be informed, prepared and comply with the new Labour Codes that are targeted to be implemented from April 1, 2021.

Dr. P V Murthy, Employment & Labor Law Consultant, Economic Laws Practice explained the new law in detailed. He mentioned that the Objective of these Codes appears to be Consolidating and amending the labour laws, Giving more flexibility to the employers in terms of hiring/mix of employees, Streamlining and bringing in more clarity on matters related to Contract Labour, Rationalizing wages and address inappropriate practices and Systematize matters related to union recognition, sole bargaining agents etc.

The Highlights of The Industrial Relations Code, 2020 were that the Fixed term employment was not defined under any earlier labour legislations. The Code defines it as engagement of a worker on the basis of a written contract of employment for a fixed period. The hours of work, wages, allowances and other benefits provided to a fixed term employee shall not be less than that of a permanent worker doing the same work or work of similar nature. Standing Orders are made applicable to industrial establishments employing 300 workers as against 50/100 at present. The employers are permitted to adopt Model Standing Orders of the Central Government as relevant to his establishment. No other certification under the Act is required.

The Occupational Safety, Health & Working Conditions Code, 2020 is applicable to establishments -any industry, trade, business, manufacturing or occupation with 10 or more workers, Contractor’s establishment employing 50 or more contract labourers. The definition of contractor includes sub-contractor, applicable to establishment engaging 10 or more inter-state migrant workers. Employers shall cover them under social security and pay a lumpsum amount of fare for travel to his/her hometown every year. The definition of “Factory” Increased the number of employees for coverage from 20 to 40 without power and, 10 to 20 with power. The Code defines “Core-Activity of an establishment” as ‘any activity for which the establishment is set up and includes any activity which is essential or necessary to such activity’ (Amendment to CL(R&A) Act in AP). Inspector under the Code is now renamed as inspector-cum-facilitator. Inspector-cum-facilitator is required to inform and sensitise employer and worker regarding provisions of the code and compliance. Employment of women with their Consent is required before 6am and after 7pm.