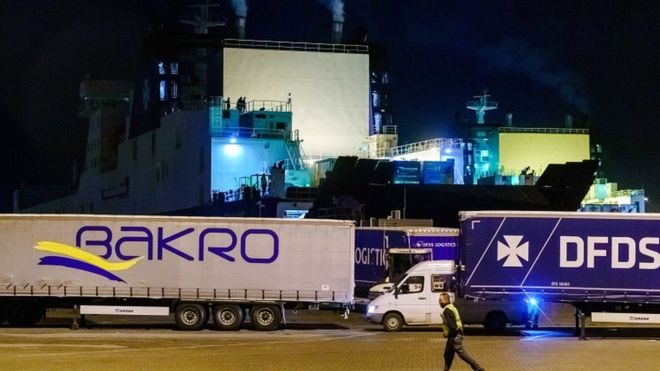 Dutch authorities have found 25 stowaways in a refrigerated container on a ferry bound for the UK from the Netherlands.

They were found at around 19:00 (18:00 GMT), forcing the ship to return to the port of Vlaardingen near Rotterdam.

The Danish-registered ferry had been en route to Felixstowe.

The incident comes just weeks after the bodies of 39 people were found in a refrigerated lorry container in Essex in eastern England.

The stowaways found on Tuesday received medical attention at the port of Vlaardingen, where police were waiting for the ship’s arrival.

Two were taken to hospital to receive extra medical care, while the other 23 people were transferred to a police facility after a medical check-up, authorities said.

The stowaways, whose nationalities are not yet known, were found in a refrigerated container on a truck aboard the ferry, authorities said. The driver of the truck was arrested and was being questioned over possible involvement, police told the Dutch broadcaster NOS.

Police told the broadcast that crew members found the stowaways and alerted authorities after hearing “sounds coming from the cooling container”. A search of the ferry involving police dogs was carried out but no-one else was found.

Seafarers’ charity Stella Maris said it was important to recognise the “hugely stressful” nature of these types of incidents for crew.

The bodies found in the Essex container last month were those of Vietnamese nationals who had arrived on a ferry from Zeebrugge in Belgium.

Two lorry drivers have since been charged with manslaughter, and several other men have been arrested in connection with the case.