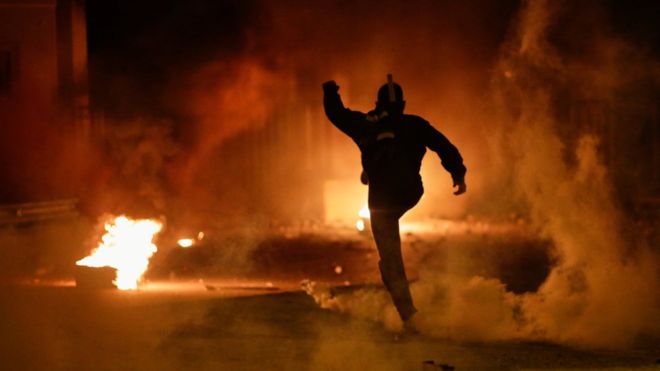 Police have fired tear gas and rubber bullets at protesters on the Greek island of Lesbos over plans to build new migrant camps.

Images from the island show protesters hurling objects at officers and a building site for one of the centres.

Dozens of people, including protesters and police officers, were injured. Greek Prime Minister Kyriakos Mitsotakis has called for calm.

Demonstrations also took place on the islands of Chios and Samos.

All five islands lie off the coast of Turkey, on a route where hundreds of thousands of migrants have tried to cross the sea on the way to Europe in recent years.

But there has been intense local opposition.

After weeks of talks between the government and local people, the government secretly shipped construction machinery and hundreds of riot police officers to Lesbos and Chios.

Wednesday saw the second consecutive day of protests on the islands. The largest were on Lesbos and Chios.

In Lesbos, crowds attempted to approach a site earmarked for a migrant centre.

A police spokesman said more than 1,000 people were at the site and claimed they had thrown stones at officers, smashing their helmets.

A police spokesman told AFP news agency that a group later broke into a hotel where riot officers were staying, injuring eight of them.

Video footage, posted online by local media, shows a group of people bursting into the hotel, beating officers and throwing objects from windows.

At least 52 riot police officers and 10 protesters were injured on Wednesday night, according to local media.

What’s happening on the islands?

On Tuesday, hooded demonstrators reportedly pelted riot police with rocks at the harbour on Chios as riot police sent from mainland Greece disembarked.

Protesters on Lesbos meanwhile blocked roads leading to a construction site with rubbish trucks and cars.

Dimitra Kalogeropoulou, Greek head of the International Rescue Committee, said the tensions should be no surprise, adding that overcrowding “is good for no one; local communities feel their islands have been transformed into giant prisons, while asylum seekers are forced to live in dangerous conditions”.

Hundreds of thousands of migrants arrived on the Greek islands off Turkey en route from Syria to Europe in 2015 and 2016. Numbers have dropped since then after an EU deal with Turkey.

However, arrivals have been rising again and a total of 42,568 migrants are currently on the islands.

Some 19,000 people are currently housed at the Moria refugee camp on Lesbos – originally designed to accommodate fewer than 3,000.

There are similar levels of overcrowding at other sites spread across the islands.

Filippo Grandi, UN High Commissioner for Refugees, recently called for an end to the “shocking and shameful” conditions at the Greek camps.

Mr Mitsotakis and his conservative government have taken a tougher line on migration. The Greek government recently invited proposals for a floating barrier to block migrants from arriving by sea.