HomeNewsNewsHarry and Meghan: Royals gather for talks over Sussexes’ future

Harry and Meghan: Royals gather for talks over Sussexes’ future 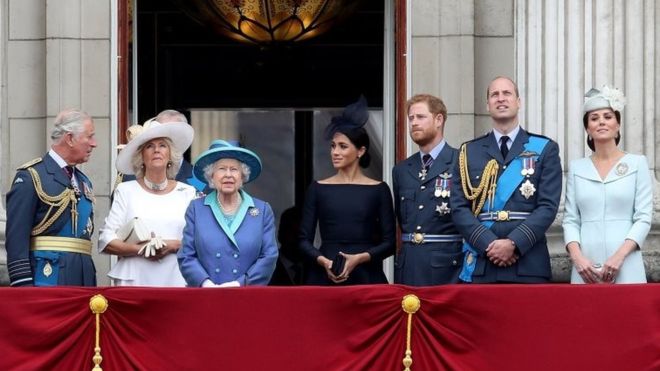 The Queen will meet senior royals in Sandringham later to discuss the future roles of the Duke and Duchess of Sussex.

Prince Harry, the Duke of Cambridge and the Prince of Wales will all attend the meeting, while Meghan is expected join the discussion by phone from Canada.

The Sussexes say they plan to step back as senior members of the Royal Family.

Prince Charles has returned from Oman for the talks after attending a condolence ceremony following the death of Sultan Qaboos bin Said Al Said.

Prince Harry is understood to be travelling to Sandringham from Frogmore Cottage, his home in Windsor.

It is hoped the talks will produce a “next step” on the way to defining the couple’s new relationship with the Royal Family – in line with the Queen’s wish to find a solution within days.

In their statement on Wednesday, the couple said they intend to “step back” as senior royals and work to become financially independent.

They also said they plan to split their time between the UK and North America, while “continuing to honour our duty to the Queen, the Commonwealth, and our patronages”.

Monday’s gathering at the Queen’s estate in Norfolk – being described as the “Sandringham summit” – will be the first time the monarch has come face-to-face with Prince Harry since the Sussexes’ announcement, which was posted on their official Instagram account.

The Queen, Prince Charles, William and Harry are expected to review a range of possibilities for the Sussexes, taking into account plans outlined by the couple.

If a deal is agreed in the coming days, there is a general understanding that it will take some time to implement.

Newspaper reports suggested the couple could conduct a potentially damaging television interview if they were unhappy with the outcome of the discussions.

Broadcaster and friend of the couple, Tom Bradby – who made a documentary with them last year – wrote in the Sunday Times: “I have some idea of what might be aired in a full, no-holds-barred, sit-down interview and I don’t think it would be pretty.”

In Sandringham later the players will receive a series of options, a range of possibilities. These will be based on the stated aims of Prince Harry and Meghan.

Leaving aside the heady brew of contradictions detailed elsewhere, the balancing of these different aims and demands is hard enough.

Money is a big issue. But so will be the status of the court of Prince Harry and Meghan that emerges.

Maybe a deal comes on Monday, Tuesday, Wednesday. But what are not up for negotiation are service and survival. Both must be observed by Prince Harry and Meghan if they are to remain royals.

But will the couple really agree to the restrictions that service and survival demand?

A deal will probably be crafted – however the direction of travel is one way. Prince Harry and Meghan are looking for the exit.

Meghan is in Canada with her eight-month-old son Archie after flying there amid the ongoing discussions, which have involved the UK and Canadian governments.

She and Prince Harry had been in Canada over Christmas, before they returned to the UK on Tuesday after a six-week break from royal duties.

The couple were already preparing to launch their own Sussex Royal charity, which they set up after splitting from the Duke and Duchess of Cambridge’s foundation in June last year.

And in December it was revealed that the couple had made an application to trademark their Sussex Royal brand across a string of items including books, calendars, clothing, charitable fundraising, education and social care services.