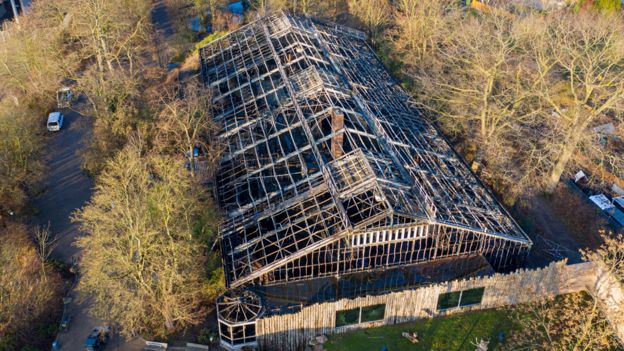 German police suspect a mother and her two adult daughters of having caused a deadly zoo fire by releasing illegal sky lanterns on New Year’s Eve.

The blaze killed more than 30 animals, including rare apes and monkeys, in the western city of Krefeld.

Police say they have questioned the three women, local residents who are said to be “extremely sorry”.

They allegedly did not realise that the lanterns – bought on the internet – were banned in Germany.

The fire on the night of 31 December gutted the zoo’s tropical ape house.

Two chimpanzees and a seven-strong family of gorillas survived. They were in a neighbouring Gorilla Garden, and firefighters managed to prevent the flames spreading from the ape house.

Five orangutans died, along with a chimpanzee and many monkeys. The ape house – replicating a rainforest habitat – was also home to birds and fruit bats.

Flying “Chinese” lanterns have a solid fuel flame inside a thin paper shell. Police say five were let off, including four that were found near the gutted ape house.

State prosecutor Jens Frobel said the case was focused on three women from Krefeld, who are from 30 to 60 years old.

The women, who are suspected of “arson through negligence”, could face up to five years in jail or a fine.

They reported to police on Wednesday, and officers praised them for “courageously” coming forward with information.

“We checked their handwriting,” police said, as handwritten New Year greetings had been found with the lanterns.

The zoo is mourning the loss of Massa, a 45-year-old western lowland gorilla, and his female partner. Massa was one of the oldest captive gorillas in Europe.

One firefighter, Andreas Klos, said: “We were amazed that the building burned down so quickly”. He noted that it did not have a sprinkler system.

The zoo thanked people for their “overwhelming wave of compassion”. It remained closed on Thursday. A makeshift memorial with flowers, candles and mourning placards has been set up at the entrance.

The apes died from smoke inhalation. “In death, too, apes are very similar to humans,” said police investigator Gerd Hoppmann.

It is the most devastating zoo fire in Germany in recent years. In November 2010, a fire at a zoo in Karlsruhe killed 26 animals including alpacas, miniature donkeys and Shetland ponies.