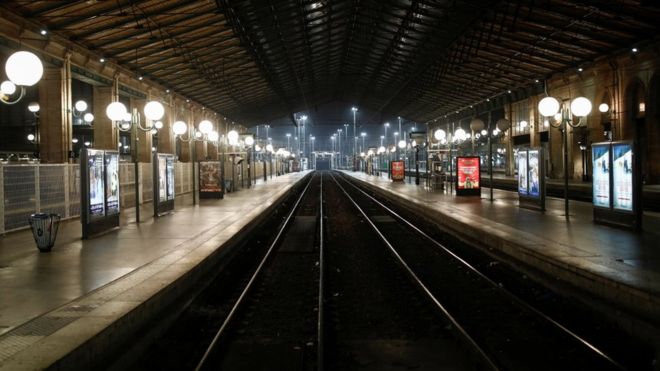 Widespread travel disruption is expected to continue in France for a second day on Friday as the largest nationwide strike in years continues.

Workers from a wide range of sectors are protesting against pension reforms.

More than 800,000 people took to the streets on Thursday, with violent clashes reported in a number of cities.

Widespread rail cancellations and disruption to flights are expected on Friday with only a fraction of the capital’s transport system working.

Paris’s bus and metro operator have said their walkout will last until Monday at least.

Other unions are expected to decide on Friday about their further strike plans, Reuters reports.

It would replace France’s current system which has 42 different pension schemes across its private and public sectors with variations in retirement age and benefits.

What happened on Thursday?

The disruption meant popular tourist sites, including the Eiffel Tower, were closed for the day and usually busy transport hubs like the Gare du Nord were unusually quiet.

In Paris there were reports of vandalism in places and police used tear gas to disperse protesters. In total, 71 arrests were made across the capital, police said.

Clashes were also reported in a number of other cities including Nantes, Bordeaux and Rennes.

What is the impact on transport?

Rail operator SNCF say 90% of regional trains were cancelled by the disruption on Thursday.

The Paris metro, which usually transports more than 4m passengers a day, had 11 of its 16 lines closed completely.

Hundreds of flights were also cancelled, with airlines warning of further disruption to come.

Eurostar has said it will operate a reduced timetable until 10 December, with 29 services planned for Friday already cancelled.

Who is striking and why?

Teachers, transport workers, police, lawyers, hospital and airport staff were among those who took part in Thursday’s general walkout.

Many other workers reportedly pre-empted the disruption by taking Thursday and Friday off, but it is unclear how long the “unlimited strike” action could last.

Some trade union leaders have vowed to strike until Mr Macron abandons his campaign promise to overhaul the retirement system.

“We’re going to protest for a week at least, and at the end of that week it’s the government that’s going to back down,” Patrick Dos Santos, a Paris transport employee, told Reuters.

The Macron administration will hope to avoid a repeat of the country’s general strike over pension reforms in 1995, which crippled the transport system for three weeks and drew massive popular support, forcing a government climbdown.

Mr Macron’s unified system – which he says would be fairer – would reward employees for each day worked, awarding points that would later be transferred into future pension benefits.

The official retirement age has been raised in the last decade from 60 to 62, but remains one of the lowest among the OECD group of rich nations – in the UK, for example, the retirement age for state pensions is 66 and is due to rise to at least 67.

The move would remove the most advantageous pensions for a number of jobs and unions fear the new system will mean some will have to work longer for a lower pension.