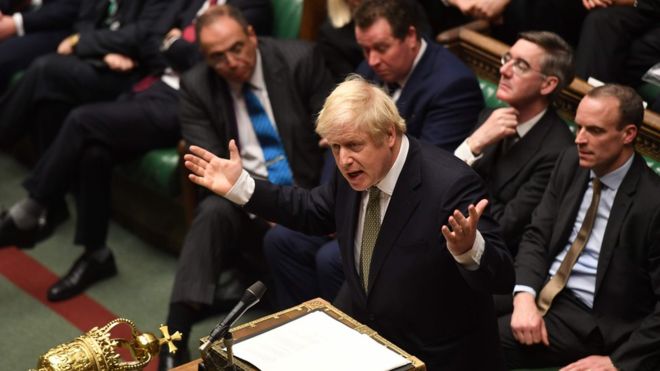 MPs will vote on Friday on whether to back the prime minister’s plan for the UK to leave the EU on 31 January.

The EU (Withdrawal Agreement) Bill would also ban the government from extending the transition period – where the UK is out of the EU but follows many of its rules – past 2020.

Boris Johnson said it would end “delay and rancour” and provide “certainty”.

Opponents say the bill leaves the UK’s future uncertain, and agreeing a trade deal with the EU could take many years.

But the government insists one can be in place by the end the transition period.

The withdrawal bill, which would implement the Brexit agreement the prime minister reached with the EU in October, was introduced in Thursday’s Queen’s Speech, setting out the government’s priorities for the next year.

MPs will have their first chance to debate it in the House of Commons on Friday at its second reading – a vote on its general principles.

With the Conservatives having won an 80-seat majority at last week’s general election, the bill is expected to pass easily, before it moves on to further scrutiny by MPs and the House of Lords.

MPs have been given a further three days – 7, 8 and 9 January – to continue their debate in the Commons.

The government says it will get it into law in time for the 31 January Brexit deadline.

There are changes to the previous bill, which was backed by the Commons in October, but withdrawn by the government after MPs rejected a three-day deadline for getting it through Parliament.

The government now says it will deal with this issue in a separate piece of legislation, but the TUC has warned that the change will help “drive down” working conditions.

Labour’s shadow Brexit secretary Sir Keir Starmer has described Mr Johnson’s decision to limit the length of the transition period to 11 months as “reckless and irresponsible”, adding that the prime minister is “prepared to put people’s jobs at risk”.

And Labour leader Jeremy Corbyn told MPs that Mr Johnson had “deliberately resurrected the threat of no-deal” at the end of 2020 by making this move.

He said: “We understand that people are desperate to move on. That does not mean we will just accept the prime minister’s reckless approach on how it’s done.”