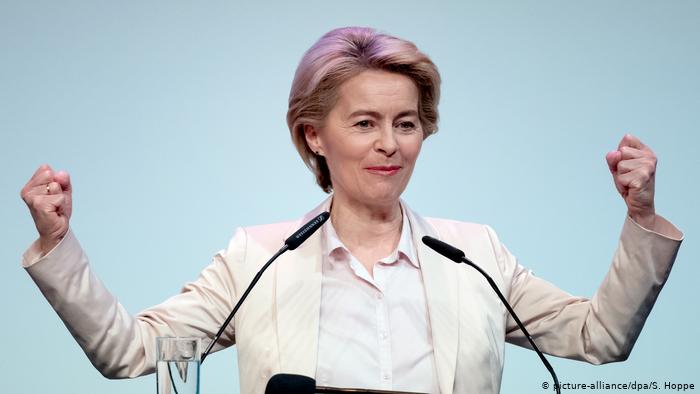 The new EU Commission head wants to turn the bloc into a geopolitical, environmental and technological leader. All laudable goals, but von der Leyen needs to secure the funds to make this happen, says DW’s Bernd Riegert.

The EU’s new Commission president, Ursula von der Leyen, made many concessions to the European Parliament to get her commissioners approved. She promised more action on climate change, to strengthen the parliament itself, to invest in the digital economy, to boost gender equality as well as Europe’s role in world affairs.

Now, she has to deliver. For that, she’ll not only need the backing of MEPs but also of the heads of state and government of the bloc — without them, von der Leyen is powerless.

After all, it was them who nominated her for the Commission’s top job, sidelining the parliament at the same time. French President Emmanuel Macron, meanwhile, has already made a show of the power he wields by vetoing accession talks with North Macedonia and Albania, and by calling for a distinctly European defense policy. He has also essentially forced his idea of a conference on EU reforms on her. And now, Germany supports the idea, too.

The meeting will be the second iteration of a reform conference — then titled Convention on the Future of Europe — held 18 years ago. But this time everyone wants a say in how to remodel the bloc.

And it will be up to the EU’s newly constituted Commission to organize the summit. Von der Leyen, who in no time whatsoever has familiarized herself with the EU’s various challenges, will be acting more as a mediator than as a decisionmaker. This is not, after all, the job of the EU’s top executive body — even though she keeps framing the Commission as a “geopolitical” actor.

Her effort to bring new momentum to Brussels is certainly commendable. Let’s hope she has enough energy to tackle the issues of climate change, the digital age and the rise of the right-wing populists. Internationally, von der Leyen will have to be frank with the Chinese leadership, the US president and also African leaders when discussing human rights, trade and migration. Above all, she will negotiate Britain’s future relationship with the bloc. This means von der Leyen faces formidable challenges ahead.

Out of the gate, into the fray

According to von der Leyen, previous Commissions have averted crises and strengthened Europe. She, however, wants to steer the EU into the future, which will no doubt prove a daunting task. She has listed ambitions targets, and to reach them she will need the support of the bloc’s strongest member state, Germany.

Von der Leyen, who served in Chancellor Angela Merkel’s cabinet most recently a defense minister, will have to prove herself next year when Germany assumes the Presidency of the European Council in the second half of 2020. She will have to draw up a European budget for the next seven years that befits her ambitious agenda – and get Germany, the bloc’s biggest net contributor, on board. Will Merkel agree to her former minister’s wishes, or leave her high and dry?

This will be the moment of truth for von der Leyen. The time of lofty speech is over. Now, it’s time for her to roll up her sleeves and get to work.