HomeNewsNewsPresident Steinmeier calls on Germans to stand up for democracy

President Steinmeier calls on Germans to stand up for democracy 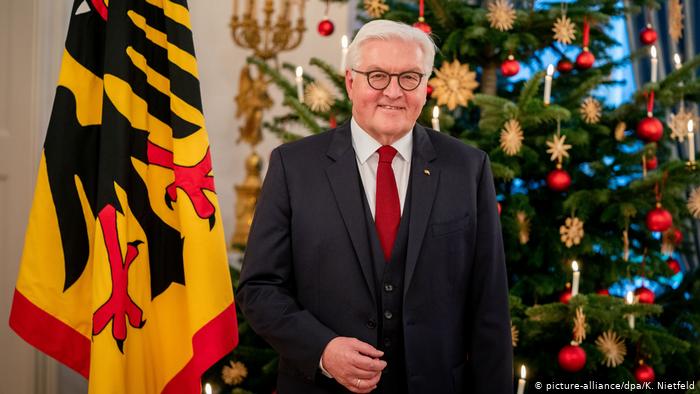 In his Christmas address to the nation, Steinmeier urges citizens to be more politically active and show solidarity with each other. He warns agains taking democracy for granted.

German President Frank-Walter Steinmeier is calling on citizens to defend democracy in his annual Christmas address to the nation to be broadcast on Wednesday.

In a preview seen by several local media outlets, the president says that since German reunification three decades ago the country has lived “in unity, in freedom, in a democracy.”

However, Steinmeier warns against against complacency. “Please never think that this can be taken for granted. We need democracy — but right now democracy needs us.”

“What our democracy needs is self-assured citizens, who have confidence and drive, common sense and decency, and who show solidarity with others,” he adds.

“I know that all these qualities are present in you, in us, in this society. And that is why I believe in us. I believe in this country.”

The president includes the right to protest as part of the necessary freedoms Germans must have, and he calls on more citizens to get involved in politics.

“You are part of this democracy. By casting your vote, by being politically active — by demonstrating in the streets, or supporting a political party, or perhaps even by serving as a local councilor — a job for which fresh blood is urgently needed in so many places. To sum up, you all hold a piece of Germany in your hands.”

Steinmeier speaks of the terrorist attack that occurred in Halle two months ago, when a right-wing extremist targeted a synagogue. He says that one of the images that made a deep impression on him in 2019 was the synagogue’s strong and sturdy door. “It bears the traces of some 20 bullets. It is a miracle that it held,” he says. “It stands for us. Are we strong? Can we defend ourselves? Are we standing shoulder to shoulder? Do we stand up for each other?”

This year’s address bears echoes of last year’s when he called on citizens to keep “democracy strong” and aired his concerns about unity “regardless of our origin, skin color, approach to life or favorite sports team.”