HomeNewsNewsPutin, Zelenskiy set to face off in Paris

Putin, Zelenskiy set to face off in Paris 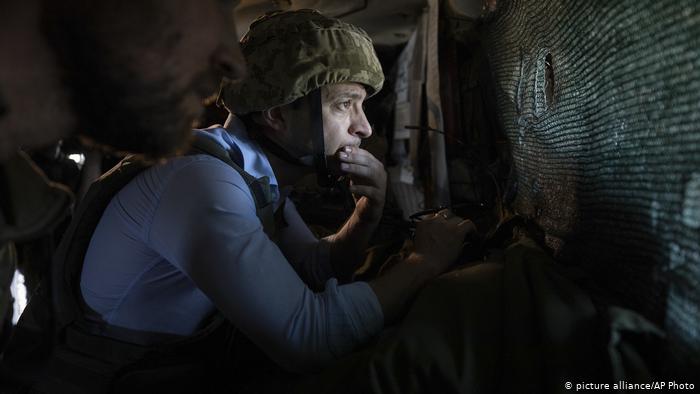 Ukrainian President Volodymyr Zelenskiy is under immense pressure ahead of Monday’s summit with Vladimir Putin in Paris. Zelenskiy wants peace — but any concessions could spark an outcry at home.

Expectations are enormously high for the first face-to-face meeting between Ukrainian President Volodymyr Zelenskiy and Russian President Vladimir Putin in Paris on Monday. Observers in the media and politics agree: the talks between the heads of state and government from Ukraine, Russia, Germany and France could mark a turning point.

In Ukraine, the sheer number of analyses of what to watch for at the summit on eastern Ukraine — and what could go wrong — are overwhelming. Pro-Western opposition politicians have already warned Zelenskiy not to cross any red lines when he meets with Putin. There’s also pressure from abroad, where US President Donald Trump has said the summit is a chance to make great progress.

These expectations are pinned on Zelenskiy’s willingness to make painful concessions to Russia, in exchange for peace in eastern Ukraine. Finding a diplomatic end to the conflict, which has been smoldering since 2014, was one of 41-year-old former comedian’s central election promises — and one that got him elected to the presidency in April.

The path to peace was laid out in the 2015 Minsk Protocol, though that agreement has yet to be implemented. All sides — the Kremlin, Russia-backed separatists in eastern Ukraine and the government in Kyiv — blame one another for the impasse. The Kremlin saw Zelenskiy’s predecessor, Petro Poroshenko, as an impediment and refused to deal with him; as a result, there have been no summits organized in the so-called Normandy Format since 2016.

Moscow signaled a willingness to talk after Zelenskiy’s election in April, but also laid out preconditions: a withdrawal of Ukrainian troops, as well as separatists, from three specified areas in eastern Ukraine, and a written statement of intent to abide by a plan that has been dubbed the “Steinmeier formula.” Named after Frank-Walter Steinmeier, Germany’s former foreign minister, it proposes a special status for separatist-controlled areas in the region for the purposes of holding a regional election, and would determine when and how a number of laws would be applied.

Zelenskiy has fulfilled Putin’s request, jettisoning one of Poroshenko’s fundamental positions, which was to first secure a ceasefire and then withdraw troops. Fighting in eastern Ukraine continues, with Ukrainian soldiers dying on an almost daily basis. Zelenskiy’s acceptance of the Steinmeier plan has caused outrage in Ukraine, and prominent activists have taken to social media with threats of renewed protests if Zelenskiy concedes too much at this week’s summit.

For Zelenskiy, Paris represents the chance to establish a complete ceasefire and organize the further exchange of prisoners — something that has been repeatedly delayed. The last direct exchange came in September, when filmmaker Oleg Sentsov, who had been sentenced to 20 years in a Russian prison on terror charges, was set free.

Speaking recently in the European Parliament, Sentsov warned that Zelenskiy may be walking into Putin’s trap. Olena Zerkal, until recently Ukraine’s deputy foreign minister, also has “doubts about the honesty of Putin’s intentions,” as she told DW.

For his part, Putin is under considerably less pressure than his Ukrainian colleague. His aim is to force Kyiv to make political concessions, among them a law that grants special status to separatists. Apparently, the current law — which expires at the end of the year — is set to be extended before a new one is passed. Moreover, Moscow wants to force Kyiv to participate in direct negotiations with the separatists, with Moscow presenting itself as impartial mediator instead of a belligerent party.

Yet Putin’s main objective is no doubt to push for elections in the separatist-controlled regions, as a way of lending political legitimacy to their autonomy. The most contentious points of order in Paris will certainly be over when elections can be held in Donetsk and Luhansk and under what conditions, as well as whether Ukraine will regain control of its borders.

The last big unresolved issue that could add tension to Monday’s summit is the issue of Russian gas transiting through Ukraine to Europe. The current transit contract between Kyiv and Moscow expires on December 31, and to date, all negotiations for a follow-up agreement have failed. This will be one of the last chances to resolve the conflict.