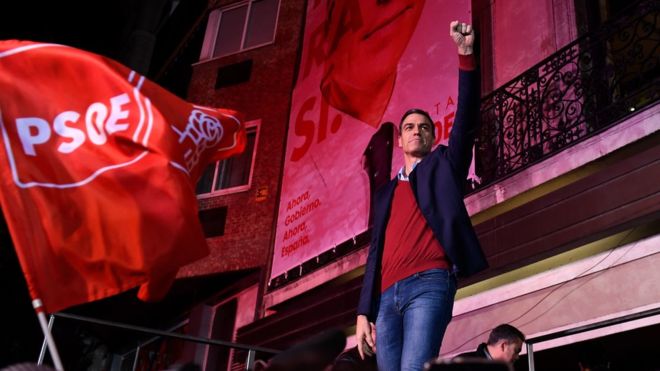 Spain’s governing Socialists (PSOE) won the most seats in Sunday’s election, but fell short of a majority – and right-wing parties made major gains.

The conservative Popular Party (PP) came in second, and far-right Vox more than doubled its seats to become the country’s third most-powerful party.

This is Spain’s fourth general election in as many years.

A previous vote in April ended with no clear majority, and the Socialists failed to form a coalition government.

Addressing Socialist supporters after the results came in, acting Prime Minister Pedro Sánchez said it was his priority to “form a stable government and do politics for the benefit of the majority of Spaniards”.

“I would like to make a call to all the political parties because they need to act with generosity and responsibility in order to unblock the political situation in Spain,” he added.

After failing to form a government, Mr Sánchez had hoped that calling another election would strengthen his party’s hand – but Pablo Iglesias, leader of left-wing Podemos, warned that it had only reinforced the far right.

“Once again we extend a hand to the Socialist party and Pedro Sánchez,” he said, adding that he was ready to start talks with the party as soon as Monday.

Podemos is the Socialist party’s natural political ally. However, a coalition between the two would still fall short of the 176 seats needed for a majority.

Meanwhile the centre-right party Ciudadanos – or Citizens – haemorrhaged support, winning only 10 seats this month compared to 57 in April.

Ciudadanos was also overtaken by ERC-Sobiranistes, an electoral coalition of pro-Catalan separatist parties.

Vox is thought to have benefited at the ballot box from the Catalan crisis, and strong anti-separatist sentiment in other regions of Spain.

“Today a patriotic alternative and a social alternative has been consolidated in Spain that demands national unity the restoration of constitutional order in Catalonia,” Vox leader Santiago Abascal told crowds after the election.

Not a good night for Socialists

Although Pedro Sánchez’s Socialists have emerged as winners having suffered only slight losses in this election, the overall result is not a positive one for the acting prime minister.

With Podemos having lost some ground and Más País securing only a handful of seats, there is no clear left-wing majority. The Socialists’ arch-rivals on the right, the PP, have recovered many of the seats they lost in April’s ballot.

If the country’s longstanding political stalemate is to be broken, Mr Sánchez might have to seek the support of the PP, or else a third election in the space of one year could beckon.

Meanwhile, the huge surge by the nationalist Vox party makes it the country’s third political force and it will now find it easier to set the agenda on the right. That is likely to hinder any attempts by Mr Sánchez to seek a conciliatory solution to the Catalan crisis.

The April election ended in deadlock, with parties failing to form a coalition by a September deadline, thus forcing Sunday’s election.

To form a coalition now, they would need to form alliances with smaller, nationalist parties, analysts suggest.

Meanwhile, the PP and Vox could seek to make the most of their gains.

One PP politician said Prime Minister Sánchez should “start to think about going”, given the early results.

What are they saying about the far right?

The huge surge in seats for Vox will be one of the biggest talking points of the night.

Spain had appeared immune to a wave of far-right populism spreading across the continent in the last decade, with many remembering the military dictatorship of General Francisco Franco.

But now Vox has established itself as a major force in Spanish politics.

“Not at all racism and fascism, in Italy as in Spain we just want to live peacefully in our own home,” he tweeted.