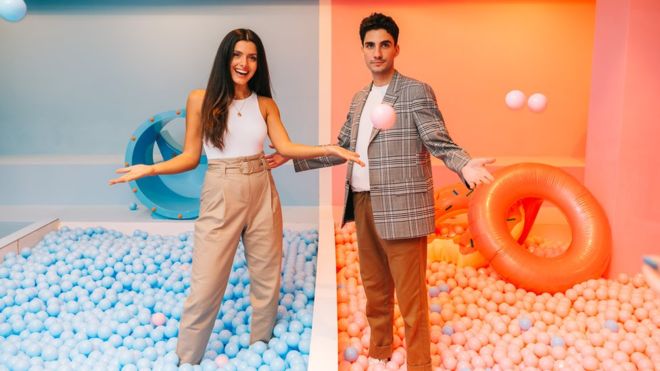 An Instagram-friendly museum is opening in Vienna, with interactive spaces for young people to create their own art.

Filled with brightly-coloured walls and giant objects, it has everything needed for the perfect selfie.

“The number of young people going to a museum has fallen, so we are trying to combat that with social media,” says Petra Scharinger, co-creator of nofilter_museum.

“They prefer to live online instead of interacting with the real world.”

The museum is filled with interactive exhibits which, Ms Scharinger says, invite people to really have fun.

There are 24 different rooms at the museum. Visitors can take pictures in front of various different-coloured walls for the perfect outfit snap.

There are also ball pits, floral walls and glitter confetti, designed for creative selfies. There is even a room filled with fake food such as cupcakes and macaroons. Nofilter_museum joins a number of establishments across the world targeting heavy users of social media.

A number of major influencers have already expressed interest in coming to the museum for shoots.

But the idea of attracting influencers is controversial, because of the often close relationship between popular influencers and brands. Much advertising on social media is subtle or even subliminal.

The company behind that museum has since been valued at $200m (£161m), according to the Wall Street Journal.

Based on the figures from other social media-friendly museums, Ms Scharinger, a business graduate, expects around 300-500 people a day to visit her museum.

“I think it’s the future of museums,” she says. “The main point is that it’s not only about selfies, but also about having a good time, being able to interact while experiencing art.

“I do think that people spend a lot of time on their phones and that’s why we try to combine that with something real and something fun. But I don’t think it is our responsibility to educate them,” she adds.

The museum is temporary, however; Ms Scharinger and co-creator Nils Peper hope to take it on tour to other cities and countries.