The Council of EU Chambers of Commerce in India (CEUCCI) organized a Luncheon Meeting in honour of Mr. Gaston Stronck, Ambassador, Embassy of the Grand-Duchy of Luxembourg on June 24, 2014 at  Ballroom, Royal Bombay Yacht Club, Mumbai. 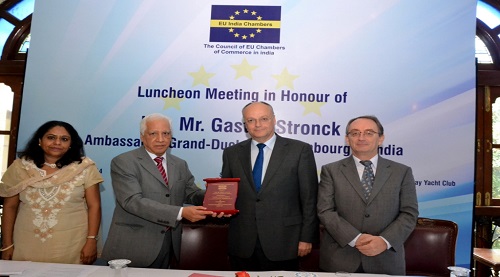 Capt. Avinash Batra, President of The Council of EU Chambers of Commerce in India welcomed H. E Mr. Gaston Stronck, Ambassador Grand Duchy of Luxembourg to India , Mr. Charles Schmit, First secretary, Embassy of the Grand-Duchy of Luxembourg and Mr. Ashok Kadakia, Honorary Consul of Luxembourg in Mumbai and other guests. He introduced the Chamber and highlighted the plethora of its activities.

He reiterated that The Council of EU Chambers is one of the foremost trade promotion organizations in India, established in 1992 to promote, foster and extend commercial and economic relations between India and the EU.  Since its inception the Chamber has grown in its reach and expanded extensively. It is committed to promoting relations and partnerships between the EU and India.

Capt. Batra briefly outlined the primary promoters of the Chamber, consisting of the European Bi National Chambers such as the Indo-Belgian & Luxembourg , Indo-French, Indo-German, Indo-Italian , Indo- Romanian Chambers and 10 European Bi national Business committees. Its Chief Patron is H.E. Dr. Joao Cravinho, Ambassador and the Head of Delegation of the European Union to India.

He went on to state the various sectors that The Chambers members represent, such as banking & finance, infrastructure, automobiles, pharmaceuticals, electrical and engineering, shipping and logistics, consultancy & services, information technology, mining, textile, energy, agricultural products etc.  The Chambers membership consists of both SMEs and large organizations, with SMEs contributing to about 60% of its membership. The Chamber is dedicated to providing flawless services to its members and other supporting organizations. Capt. Batra outlined the Chambers services to its members, which include dissemination of information, networking opportunities, leadership conferences, workshops, seminars, arranging visits of Indian companies to the EU, as well as assisting Indian companies to enter European markets, etc.

Capt Batra also made a mention of few recently conducted activities by the Chamber such as Europe Day Celebration to mark the foundation of Europe, Indo-Bulgarian forum and interactive meeting with 16-members of the Young Entrepreneurs of Slovenia.

Talking about the Indo- Luxembourg relations, he said they have traditionally been very close and friendly and these relations would be further strengthened through regular exchange of high-level visits between the two countries.

Luxembourg offers an exceptional range of assets and opportunities for doing business in Europe. Luxembourg thus can be the ideal base for Indian companies who want to establish a permanent base within the European Union.

Capt. Batra concluded his speech with thanking all present and offering mementos to Chief Guest.

H. E Mr. Gaston Stronck Ambassador Grand Duchy of Luxembourg and Chief Guest at the event addressed the gathering. Some of the key points highlighted were as follows:

She stated that EU India Chamber has undertaken many programmes in the past year for its members, with the purpose of getting the industry together and sharing its common view with regards to promoting trade and commerce between India and European Union. Chamber will always strive to promote the trade relations between both the regions and undertake many such activities which shall help our members to know about the latest happenings with regards to EU India Trade.

Dr Shome also mentioned that Chamber was privileged to host the meeting in honour of Mr. Stronck in past. We are aware His Excellency has taken many steps to strengthen and improve the relations between India & Luxembourg and we at Chamber are very happy to organize this meeting in his honour.

Dr. Shome sincerely thanked the Principal Sponsor –Seahorse Group of Companies whose support made the meeting successful. She also thanked Citibank for supporting the event.