The Council of EU Chambers of Commerce in India (CEUCCI) has organized an interactive meeting with 16-member Young Entrepreneurs of Slovenia on Tuesday, March 4, 2014 at Ball Room, Royal Bombay Yacht Club in Mumbai. 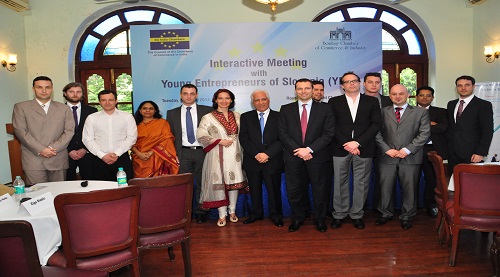 Capt. Avinash Batra, President of The Council of EU Chambers of Commerce began his address by welcoming all the delegates and Indian participants. He briefed about the Chamber and its multifarious activities.

Some of the points which he mentioned were:

Capt. Batra concluded his speech with thanks and wishing the delegates for successful B2B meeting organized thereafter.

Mr. Til Lajovic, Executive Director YES Association and Leader of the delegation introduced the organization. He said YES is an exclusive association of young influential executives, entrepreneurs, businessmen and other outstanding young individuals who want to make a difference. Operating on the territory of SEE, mostly in the ex-Yugoslavia states (Croatia, Serbia, Bosnia Hercegovina, Macedonia, Montenegro) and HQ in Ljubljana, Slovenia.

The mission of YES is to support and influence the development of an open, positive and friendly business and social environment where young, talented and ambitious individuals can grow their potential and contribute to the broader society.

The Association YES from Ljubljana is the SOCIETY of YOUNG EXECUTIVES who are already successful in their fields of operation with the interests in the emerging markets, especially to India with its great culture heritage, business opportunities and strengths of its people.

He said as India has a huge potential and we are here to explore the business opportunities. Mr. Til Lajovic concluded his speech by thanking the organizers for organizing the good meeting in short notice.

Mr. Girish Ramachandran, Corporate Vice President Tata Consultancy Service (TCS) &Vice President CEUCCI shared his views on the current outlook of Indian IT sector. Some the points on which he spoke are as follows:

Mr. Anupam Johri, Chief Representative Raiffeisen Bank International AG and immediate past President of CEUCCI shared his views on the current scenario of Indian banking sector. Some of the points he highlighted are as follows:

Mr. Firduas Rana, General Manager-Sales Taj Mahal Resorts & Hotels shared his views on the current market outlook of hospitality sector. Some of the points on which he spoke are as follows:

Mr. Dhruv Kumar, Senior Manager AllCargo Logistics Ltd. shared his valuable thoughts on logistics sector in India.  Some of the points on which he spoke are as follows:

Dr. Renu Shome, Director The Council of EU Chambers of Commerce in India (CEUCCI) proposed the vote of thanks.

She thanked the leader of delegation Mr. Til Lajovic and all the participants’ delegates from Slovenia and the speakers Mr. Girish Ramachandran, Mr. Anupam Johri, Mr. Firduas Rana and Mr. Dhruv Kumar for sharing their very informative views on the sectors for the benefits for the guests. She also acknowledge the support extended by Mr. Vikas Gadre and his colleague Ms. Milisha Nambiar  in organizing meetings.