The Council of EU Chambers of Commerce in India organized the interactive meeting with H.E Artis Bertulis, The Ambassador of Latvia to India on 17th February 2020 . 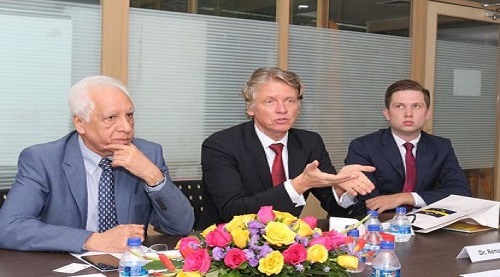 The participants were from the Tourism and Cinema fraternity. Capt. Avinash Batra, Honorary Consul of Latvia in Mumbai and the Chamber’s Past President was also present for the meeting. The major part of interaction was hovered around Cinema and Tourism Sector.

The meeting began with Capt. introducing the participants with each other. He stated that Latvia is one of the biggest cities in the Baltics and expressed the beautiful attributes of Latvia i.e., being a port country connecting the Baltic Countries in the European Union and the increasing popularity of Latvia for being a highly accessible connecting point to Northern Europe among other regions.

Latvia is a beautiful small country and has many offerings for everyone. He also said that Schengen Visa works in Latvia and Latvia organizes Honorary Consuls Summit every 2 years. Travel & Tourism is popular sector. Capt. Batra also stated that people in Latvia speak English and Latvia is far cheaper than any other European Country.

Dr. Renu Shome educated the participants about the Chamber’s activities and functioning through a brief PowerPoint presentation. She recollected her memories of delegation taken to Latvia by the Chambers and how Latvia has a beautiful landscape. Dr. Shome mentioned that EU Ambassador is the Chief Patron of the Chambers. Chamber’s membership comprises of Indian and European companies. EU Chambers has its membership spread across country and represents almost all sectors. Role of the Chambers is to assist companies to set up business in India and Europe. She said we also promote culture between the two regions as it plays an important link to connect people. Cinema being one of the mediums of the Culture and we felicitated the personalities like Mr. Amitabh Bachchan and Mr. Anil Kapoor from world of Indian Cinema for their contribution.

The Ambassador laid emphasis on the commendable qualities of Latvia. He also expressed his gratitude to the audience for taking time out of their busy schedule to attend the discussion. The Ambassador also thanked the Chamber for organizing the event and expressed his excitement to be back with the Chamber for a second time. He stated that Latvia is the size of Sri Lanka but has population 10 times lesser than Sri Lanka.

The Ambassador talked about the glory and grandeur of Latvia. The country is highly accessible internally and externally via railways, airways and roadways. He said every day from Latvia there are 3 flights to Stockholm, 5 flights to Helsinki and overnight train to Russia. Latvia has lower birth rate and is cost effective.

Indian subcontinent citizens can travel to Latvia by flights such as Russian Airline, Ukrainian Airline to name a few. The country of Latvia offers proximity to North-Eastern Europe and also serves a connecting point between the Atlantic and the Pacific.

The country being in proximity to oceans has a sophisticated and strong water transportation system with 1 million seaport travelers annually and 66 million tons of cargo shipped annually. The airways saw 7.6 million people as in 2018. It is the 3rd fastest growing European airport. He said “we are very much interested in ‘niche tourism”. One of the architectural styles Latvia is best known for is Art Nouveau. Riga alone is home to over 700 buildings built in the iconic Art Nouveau style of the early 20th century, and we are proud of it. Latvia has medieval castles, palaces and different sea and land scapes. The shores of the Baltic Sea in Latvia are 500 km long. Latvia’s lengthy coastline never ceases to surprise with its dunes, steep cliffs, sandstone outcrops, impressive rocks and caverns. The coastline owes much of its charm to the fishing villages, the multiple areas untouched by civilization, imposing port cities, and the popular resort city of Jurmala.

For something completely different, one can try the Baltics’ only bobsleigh and luge track. Summer and winter rides are available. The maximum speed is 120 km/h.

Food plays a big role in our culture and we always like to make sure our guests are well fed.

Traditional is perfectly combined with a fast-developing contemporary. Latvian cuisine, which is based on local and seasonal produce often sourced in our forests and meadows. Eating becomes smart, artistic and atmospheric experience. International cuisine, like the Indian, is likewise loved and well represented. Riga has a high concentration of top-class restaurants serving contemporary Latvian dishes.

Twice a year, the city hosts Restaurant weeks during which visitors can enjoy 3-course meals for 15-20 EUR. Latvia has rich cultural heritage like Opera’s and Ballet among others to its own citizens as well as tourists being one of the reasons for its growing popularity.

The Ambassador talked about the rich musical cultural heritage of Latvia with the country organizing the National Song and Dance festival every 5 years held over a period of 1 week with the number of attendees increasing regularly. He also stated that Latvia has intangible heritage as one of the music festival in Latvia is about western classical music and in 2023 it will be 150th year of this traditional festival. Like India Latvia is also closer to its agricultural brothers and to the ones who make handicrafts. Latvia is blessed with a large number of manor houses built in neogothic, baroque and classicism styles.

Latvia has 4 seasons there is high quality of pine and wood in Latvia which makes it perfect location for Japanese and Korean film makers. The popular television series “War and Peace” which aired on the British Broadcasting Corporation medium had The Rundale Palace in Latvia as one of its shoot locations which is one of the finest examples of Baroque and Rococo architecture in the region, and has been completely restored. Latvian company Aerodium constructed the world’s biggest public use wind tunnel to ensure the special effects in the film “Mission: Impossible – Fallout”. Ambassador also expressed his desire for international romantic movies to be shot in Latvia and mentioned the incentives Latvia offers like the National Cinema Program.

There are around 2000 Indian students in Latvia studying ICT and technical science subjects.

Ambassador stated that we are very much interested in business and we have few of the biggest trade fairs, we have also hosted international summits. He recollected the visit of Vice President of India to Latvia for business summit. Medical/Health tourism and Financial sector are booming industry.

The facility of registering a business in a single working day is also available. The country also offers a startup visa program. The Ambassador also suggested contacting the Latvian Investment Agency for in depth insight and information.

The Ambassador also offered a plethora of other information to the participants like Latvia achieving growing strengths in the hospitality sector, manufacturing sector, and growing impetus in the Life Sciences

sector. Latvia is one of the pioneering countries in cutting edge technology like the 5th Generation Network of the Internet of Things and Unmanned Aerial Vehicles like Drones. Latvia also competes for fastest 5G network in Europe and is always in top 10.

The meeting concluded with Dr. Shome proposing the vote of thanks to the Ambassador for visiting the Chamber. The Ambassador in turn expressed his thanks to the attendees for participating in the event and agreed to meet interested participants individually to understand their requirements. He suggested mounting a study tour to Latvia to explore the opportunities and ensured to extend all possible support.