The Council of EU Chambers of Commerce in India has organized a webinar on “Investment opportunities for the Business Services Sectors in the City of Lodz, Poland” 28th January 2021 . 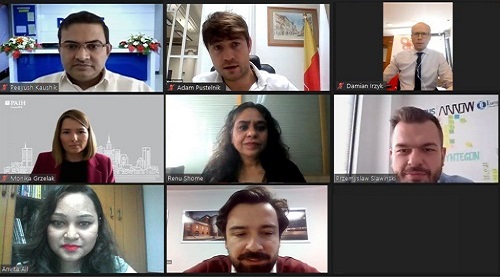 He thanked Guest of Honour Mr. Adam Pustelnik, First Deputy Mayor the City of Łódź, Poland for participating at the webinar.

He introduced Mr. Adam Pustelnik, Deputy Mayor of City of Lodz, Poland, who was graduated from the University of Lodz in master of law, International Relations), the European Academy of Diplomacy and the University of Oxford. He worked among close cooperation with Union Business and played a key role in facilitation of economy and relations between Poland and India.

Mr. Kaushik highlighted that EU Chambers is one of the foremost trade promotion organizations in India established to promote, foster and extend commercial and economic relations between India and the EU. The Chamber’s primary promoters consist of European Bi National Chambers and European Bi National Business committees and its Chief Patron is the Ambassador and the Head of Delegation of the European Union to India.

The membership of the Chamber includes representation from several industry sectors- such as banking & financial, infrastructure, automobiles, Pharmaceuticals, electrical and engineering, shipping and logistics, consultancy, IT, Energy, Agricultural products etc.

EU Chambers also has functional advisory and sectoral committees across various sectors of the industries by very senior people from industry. These committees in the Chamber can support SMEs in various European countries seeking to establish strong business relationship with India whether it is trade partnership, technology exchange, joint venture, Green field investment. We shall be delighted to offer and extend our Chamber services to them.

He also talked about the bilateral trade relations between Poland and India it is India’s largest trade partner and export destination in the Central European region, with bilateral trade growing almost seven-fold over the last ten years. As per Indian statistics, the overall value of bilateral trade in 2019 was US$ 2.36 billion.

Excerpts from the speech of Mr. Adam Pustelnik, First Deputy Mayor the City of Łódź, Poland

The economic relations and ties between Poland and India particularly eastern region Poland cooperation with India is very deep and its very important one of the biggest in the service sector which constitutes for the middle class. Infosys came into the time when there was the economic situation was far worse. It contributed vastly to the economic growth for the city and to a large extend a good economic situation that we are right now.

The interesting fact  of the city of Lodz, Poland is the wide cultural diversity -Indian Asian  that Poland shares with great pride.  Undoubtedly, this diversity has enviably placed city of Lodz in a economic vibrant orbit.

I also believe that there is a huge scope for growth in deepening our relations in the COVID and post COVID times. The major factors that create or attract investments are no longer limited to the strategic advantages that city of Lodz offers. Even at the country level, Poland -a member of EU is very well engaged with the European Union to exploit the strategic advantage for itself and also for its economic partners and allies.

Also, one of the unique elements in Poland and in Lodz is that the entire country is covered by the so-called one investment zone that is Polish Investment Zone where the entire country is one big special economic zone territory. I think it was a great move by the Government it positions us economically better the way we were in the past.  One of the unique selling points from the logistics perspective is the best located area at least in the Central Europe because it is a mere junction and crossroads of all pan European highways, roadways and railways which connects and makes us so available that you can access us in a very short time almost every point of the world. It gives us a huge advantage.

Excerpts from the speech of Mr. Damian Irzyk, Consul General, Consulate General of the Republic of Poland

It is a good platform and opportunity for me to share why Poland is an attractive investment destination. So, let me start with the broader economic system of Poland. It good to remind that Poland back in 3 decades is on a constant growth path. Same as India, we managed to grow without any interruption in 2008 and 2009 where western world was somehow struggling with the shrinking GDPs, Poland as well as India kept rolled.

The major rating companies acknowledged Poland’s economic success. They have rated Poland on a bigger scale, which is very optimistic. What is more important is that our image was not even shattered by COVID 19 pandemic last year. What is the good thing that Poland was least affected by the COVID pandemic lockdown and so our economy was probably shrinked by 4.5% last year which is relatively good comparing to other countries which were fighting COVID?

Poland is a very reasonable price country I would say when it comes to services, pricing of land, properties, etc. My whole generation is actually growing up together with economy. We have many reasons to be optimistic about the growing of Poland’s economy. All the ranking, business global competitiveness are within our region, it is important to emphasis on as a region Central Europe, and we are in the middle of the continent. Poland is now on number 3 when it comes to inflow of investments. The economic indicator is also reflected by the investor sentiments around the globe. There are currently 200 projects running across Poland. What is important now is Poland used to be and now is the recipient of EU both grant and privilege loans.  You might be aware that EU as a huge financial programme, which was agreed in summit last year for the year 2021 and 2027. We are expecting to receive about 67 billion euros during this financial period.

So, it will further improve our infrastructure and further invest in Polish development. I mentioned the strategic location, which is worth to say the case of one Indian investor who was travelling to Germany, and trying to purchase a company there to gain a better access to the EU market. He travelled whole Germany and he could not find anything there that was really kind of interesting to them. So this investor was from Maharashtra by the way very close to my heart and my location now. Then he realised actually next to Germany there exist a very dynamic country named Poland. Then he purchased 2 factories there and he realised that it is actually is just 2 hours drive from Berlin the capital of Germany and he can easily produce in this region and selling this to Germany and further west to France, Spain and Italy.

This shows us how Poland is continued to locate in Europe, it is also spotted by the Chinese road project from China to Europe, and then it is difficult to overpass us. Poland is very close to Baltic Sea and we have an access to the deep sea that makes Poland very accessible via deep seas. Poland has recently experienced a rapid development in international airports. There are 13-14 international airports in Poland and our national carrier launched direct flights to New Delhi and that has stopped due to COVID now but we are looking forward to return to the airport now. There is a direct connection between Warsaw and Mumbai but only cargo flights and I hope this experience will result in more Polish airlines presence in Mumbai and eventually it will cut short our travel to Warsaw in just 7-8 hours comparatively in todays’ 10-12 hours.

PAIH is working with a network of 150+ experts in the fields of trade and investment, based in Poland and abroad. The languages spoken in Poland are- English, Chinese, German, Spanish, Italian, Portuguese, French, Russian, Japanese, Czech, Slovak. In Poland there do exists around 950+ offers in a centralised database of investment sites (plots, warehouse & office space). There are currently 190 active projects running in Poland.

Some of the key industries in Poland are automotive and electro mobility, Aerospace, Business Services Sector, Research & Development, Food processing, Electronics and white goods. Poland is the largest country in Central Eastern Europe and the population stands 38,4 mn which is 5th in EU. 23 million of Poles are of working age. Poland has the largest inflow of foreigners for employment in the EU.

Before COVID, Poland was already EU leader in capital inbound investment. There is 14% year-to-year increase in the number of FDI project in the year 2019. Poland has the highest growth rate in the OECD between 1990 and 2019, with no recession since 1991. Poland has one of the smallest real GDP declines in the EU (-3,6%).

In Poland for R&D, there are more favourable conditions for shared growth. There is a straightforward procedure – one-stop-shop at the Ministry of Economic Development. It has easier access to funds for innovativeness development from public aid programs. Annual benefits – R&D expenditure is deductible from your tax base. When it comes to R & D tax cuts- SMEs and MNCs are treated equally. Poland has a long-term tax benefits – tax cuts are available over 6 consecutive tax years. The 5% tax rate is eligible income gained through the sale of IP rights. Poland covers the most popular IP rights – copyright in computer programs, patents, industrial designs. Poland has a long-term tax benefit – applicable during the entire lifespan of the rights.

Infosys in Poland is located in Green Horizon with Class A building in Lodz, which is spread across 33000 square meters.

Infosys in Poland has opened a new center in Poznan, which has + 30 clients with over 2500 employees.

Excerpts from the speech of Dr. Renu Shome, Director, The Council of EU Chambers of Commerce in India

It gives me immense pleasure to inform you that the EU India Chamber has undertaken many programmes in the past year for its members, with the purpose of getting the industry together and sharing its common view concerning promoting trade and commerce between India and European Union.

Friends, we assure you that the Council will always strive to promote the trade relations between Poland and India and undertake many such activities, which shall help our members to know about the latest happenings concerning the trade and investment between the two countries.

The EU Chambers are pleased to organize for you, this Webinar “INVESTMENT OPPORTUNITIES FOR THE BUSINESS SERVICES SECTORS (IT, ICT, BPO, BPM, GBS, SSC) IN THE CITY OF LODZ, POLAND” which is a very interested subject.

EU Chambers has also mounted a Business Delegation to Poland in the year 2018 with the objective to promote trade and bilateral business relations between Poland and India.

India and Poland share a long-standing friendly relationship, marked by high-level political contacts, vibrant economic engagement and traditional cultural links. A cordial political relationship has emerged in the current century, particularly after Poland joined the EU in 2004, and became one of India’s key economic partners in Central Europe.

Ladies and Gentleman, once again I would like to thank all of you for participating in the Webinar. Hope you all enjoyed this session!