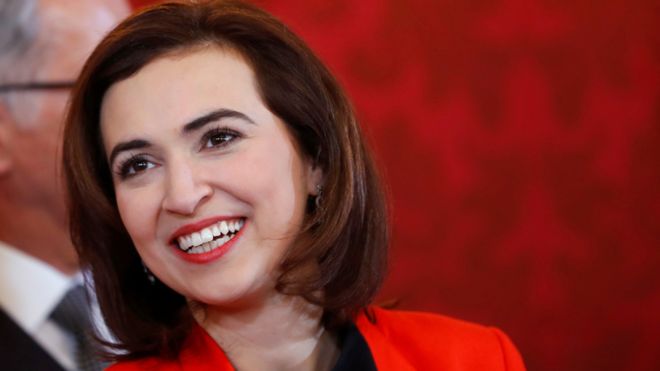 Austrian media say three police officers from the elite Cobra unit are guarding her round the clock, though the government has not confirmed that.

Ms Zadic, 35, is among four Greens appointed to senior posts in Chancellor Kurz’s cabinet, which was sworn in on Tuesday. The young conservative chancellor switched to an unprecedented partnership with the Greens after a scandal engulfed his former allies, the far-right Freedom Party (FPÖ).

Mr Kurz’s tweet called hate speech on the web “an obnoxious phenomenon of our time” and said “such a thing must not be given any space among us!”

“@Alma_Zadic and all the others targeted by it have my total support!”

Immigration has been a hot political issue in Austria in recent years, especially since more than a million migrants, many of them refugees from wars in the Middle East, sought asylum in Central Europe in 2015-2016.

Ms Zadic says she will strive for a fair immigration system as justice minister. As a 10-year-old she fled the Bosnian war with her parents in 1994 and they settled in Vienna. The minister has been described as a Muslim, but she denies any religious attachment.

As an MP, before joining the new government, she was already a target for those suspicious of her immigrant background.

An MP in Mr Kurz’s Austrian People’s Party (ÖVP), Johann Rädler, once interrupted her by shouting: “We’re not in Bosnia here!”

Ms Zadic became an MP in November 2017 and in mid-2019 she joined the Greens, leaving a small green left-wing party called Jetzt-Pilz List.

On Facebook she says she got involved in politics in order to fight for social justice, so that everyone “regardless of their social or national origin, whatever their religion or sex, gets the same chances in life”.

She rejects the notion that individuals should choose a single identity. “It was diverse New York that showed me I could be simultaneously a female Austrian, Bosnian and European,” she told the news.at website.

After excelling at school and university she worked for international organisations in New York and then spent six years with a Vienna law firm specialising in human rights issues.

She is currently appealing against damages of €700 (£595; $777), which a court ordered her to pay over a photo she had posted on the internet. A young man in the photo denied that he was pictured giving a Nazi salute – he said he had simply been waving to fraternity friends. Ms Zadic had captioned it: “no tolerance for neo-Nazis, fascists and racists.”