HomeNewsNewsBrexit: Boris Johnson to hail ‘dawn of a new era’ on departure day

Brexit: Boris Johnson to hail ‘dawn of a new era’ on departure day 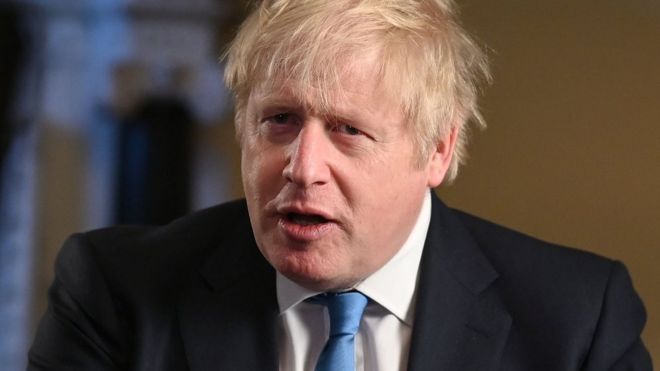 Prime Minister Boris Johnson will hail the “dawn of a new era” later, as the UK prepares to leave the European Union after 47 years.

In a speech to be shown at 22:00 GMT – an hour before the official departure time – he will say Brexit is “not an end but a beginning”.

He will describe severing ties with the other 27 EU nations as “a moment of real national renewal and change”.

Little will change immediately, as the UK begins a “transition period”.

Most EU laws will continue to be in force – including the free movement of people – until the end of December, by which time the UK aims to have reached a permanent free trade agreement with the EU.

In a statement, Labour leader Jeremy Corbyn urged the country not to “turn inwards” and instead “build a truly internationalist, diverse and outward-looking Britain”.

Brexit was originally scheduled for 29 March last year but was repeatedly delayed when MPs rejected a previous withdrawal agreement reached by the EU and former Prime Minister Theresa May.

Mr Johnson was able to get his own deal through Parliament after winning December’s general election with a House of Commons majority of 80, on a pledge to “get Brexit done”.

This brought to an end more than three years of political wrangling, following the referendum of 2016, in which 52% of voters backed leaving the EU.

Michel Barnier, the EU’s chief negotiator, told the BBC his thoughts today were with “the millions of British citizens who are sad, as we are sad”.

“We will remain friends, allies and partners,” he added. “We have to rebuild. I think we are stronger together.”

Mr Barnier said he had been seeking to understand Brexit, and that he believed it showed the EU needed to listen to the people of Europe more closely.

To mark Brexit, Mr Johnson will hold a cabinet meeting in Sunderland – the city that was the first to back Brexit when results were announced after the 2016 referendum – on Friday morning.

The prime minister – who led the 2016 campaign to get the UK out of the EU – will attempt to strike an optimistic, non-triumphalist note in his speech, stressing the need to bring all sides together.

“The most important thing to say tonight is that this is not an end but a beginning,” he will say.

“This is the moment when the dawn breaks and the curtain goes up on a new act. It is a moment of real national renewal and change.”

In his address, filmed in Downing Street, Mr Johnson will also say: “This is the dawn of a new era in which we no longer accept that your life chances – your family’s life chances – should depend on which part of the country you grow up in.

“This is the moment when we begin to unite and level up.”

Supporters of the EU are expected to take part in a procession through Whitehall at 15:00 GMT to “bid a fond farewell” to the union.

Later, Brexiteers will gather in Parliament Square for a celebration, and a clock counting down to the moment the UK leaves the EU will be projected on to Downing Street.

Buildings along Whitehall will be lit up and Union flags will be flown from all the poles in Parliament Square.

A new commemorative 50p coin will also come into circulation to mark the UK’s withdrawal.

However, Big Ben will not chime at 23:00 GMT due to ongoing renovation works – despite a fundraising effort led by Conservative MP Mark Francois.

President of the European Commission Ursula von der Leyen paid tribute to the British citizens who had “contributed to the European Union and made it stronger”.

“It is the story of old friends and new beginnings now. Therefore it is an emotional day, but I’m looking forward to the next stage,” she said.

Upcoming negotiations will be “fair” but each side will fight for their interests, she added.

In Brussels, the UK flag will be removed from the EU institutions, with one Union flag expected to be consigned to a museum.

The city’s Grande Place was illuminated in red, white and blue on Thursday, in what organisers called a tribute to the ongoing friendship between the UK and EU countries.

In Scotland, which voted to stay in the EU in the 2016 referendum, candlelit vigils are planned.

The Leave a Light On gatherings are taking place in Aberdeen, Dundee, Glasgow, and Stirling, among other locations, and participants intend to send a message to the EU to keep open a place for Scotland.