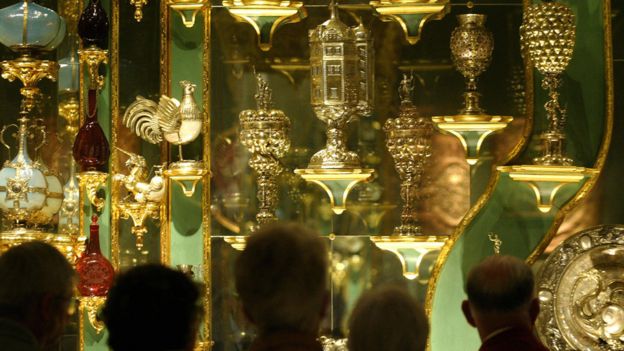 The historic sets consist of 37 parts each, and there are fears the thieves may try to break them up.

Officials are still trying to establish exactly how much was stolen in the break-in early on Monday.

Saxony’s ruler, Augustus the Strong, created the collection in 1723 in what is one of the world’s oldest museums.

“Three out of 10 diamond sets have gone,” said Marion Ackermann, head of the Dresden state museums.

The stolen sets from the Green Vault (Grünes Gewölbe) are reported to also include some rubies, emeralds and sapphires.

How did the thieves get in?

The thieves – still on the run – removed part of an iron grille on a ground-floor window, then smashed the glass.

At about 05:00 (04:00 GMT) on Monday, firefighters were called to tackle a blaze in a nearby electricity junction box.

There is speculation that the fire disabled the museum’s alarm system. It put out some of the street lights.

Police are examining CCTV footage which shows two suspects in the dark. But more people may have been involved in the robbery.

A car found burning in Dresden early on Monday may have been the getaway vehicle used by the burglars, police say.

The museum had guards on duty at night, Ms Ackermann said.

Dozens of police cars are at the scene and the Green Vault in central Dresden is now shut.

What exactly was taken?

“Three out of 10 diamond sets have gone,” said Ms Ackermann.

However, Dresden police and museum officials did not provide any further details.

How much are the stolen jewels worth?

Ms Ackermann described them as “priceless – we can’t put a figure on it”.

“The items cannot be sold on the art market legally – they’re too well known,” she said.

Ms Ackermann stressed that the cultural value of the unique collection was far greater than its material value.

What is the Green Vault?

The collection is housed in eight ornate rooms in the Residenzschloss – a former royal palace.

Three rooms were destroyed by Allied bombing in World War Two, but after the war, the museum was restored to its previous glory.

It is called the Green Vault because some rooms were decorated with malachite-green paint.

The most valuable items are in the palace’s historic section on the ground floor.

There are about 3,000 items of jewellery and other treasures decorated with gold, silver, ivory and pearl. They include a figure of a moor studded with emeralds and a 648-carat sapphire – a royal gift from Russia’s Tsar Peter the Great.

One of the most valuable jewels is a 41-carat green diamond currently on show in New York.

The collection was founded by Augustus the Strong. He was Elector of Saxony (a German prince entitled to take part in the election of the emperor) and later king of Poland.

What has the reaction been?

Saxony’s minister-president, Michael Kretschmer, voiced outrage at the crime, saying “not only were the state art collections burgled, but the people of Saxony too”.

“The valuables housed in the Green Vault and Residenzschloss were acquired by people in the Saxony Free State with difficulty, over many centuries.” He said the collection was an integral part of Saxony’s history.