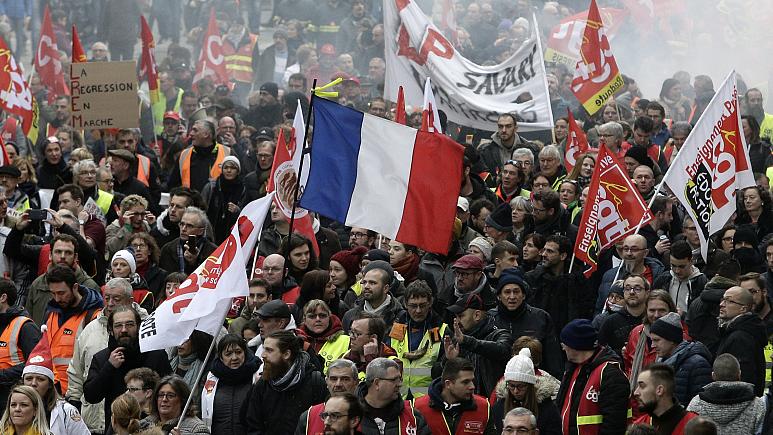 French unions have warned there will be no “Christmas truce” in its dispute with the government over pension reforms which has led to weeks of nationwide strikes.

Power was cut to 100,000 homes and offices, schools were closed, roads blocked and public transport crippled on Tuesday as protests were staged across France in support of the general strike over pension reform.

Flares and union flags filled streets all over the country on the 13th day of industrial action against the government’s plan to raise the retirement age to 64.

With only one-in-four high-speed trains running and half of Paris metro lines closed, the commute to work was a misery for millions.

Workers from the CGT carried out what they called “targeted” blackouts on electricity networks around Lyon and Bordeaux, further disrupting travel.

No breakthroughs in sight

Despite the union’s hardline stance, Tuesday did not see an uptick in street protests they had hoped for to persuade Emmanuel Macron’s government to drop the reforms.

In Paris, police fired tear gas and charged to disperse demonstrators from the Place de la Nation, though there was none of the rioting and looting that marked the “yellow vest” protests against high living costs late last year.

The unions spearheading the industrial action said in a joint statement that Tuesday’s marches across France reflected a “massive rejection” of Macron’s planned pension system overhaul and called for the reform to be abandoned.

“If it is not pulled, there will be no truce,” the unions said.

Why workers are striking

Many of the country’s largest unions say the Macron reforms will led to an erosion in the pension protections for French workers.

“We have one of the best pension systems in the world, if not the best. However, the President of the Republic decided, by pure ideology, to destroy it,” the General Confederation of Labour (CGT) wrote in a statement calling for workers to strike.

CGT leader Philippe Martinez said it was up to the government to pull its new reform plan if they did not want the strike to impact the upcoming winter holiday season.

But the secretary-general of the CFDT union, Laurent Berger, said it is elements of the plan they want to change.

“It is especially those who started working at a young age and those who find themselves unemployed at the end of their career who will be penalised,” Berger said in a statement.

But the government has shown no sign of folding on its plans which are meant to de-complexify the system, by transforming it to a single point-based system.

“I am completely determined to carry out this transformation because I believe it is deeply just,” Philippe said while unveiling the plan last week.