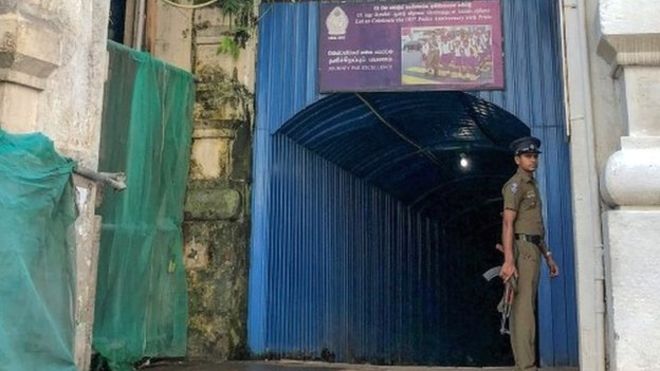 An employee of the Swiss embassy in Sri Lanka has been “detained and threatened” in Colombo, sparking anger from Swiss authorities.

Switzerland summoned the Sri Lankan ambassador and demanded an inquiry after the incident came to light.

They did not provide more details, but it comes after a top Sri Lankan police officer reportedly sought Swiss asylum.

It is widely believed he feared for his safety after the election of Gotabaya Rajapaksa as Sri Lanka’s president earlier this month.

Mr Rajapaksa, a former wartime defence chief, is accused of vast human rights abuses, which he denies – and was the subject of numerous investigations.

What happened to the woman?

The Sri Lankan employee at the Swiss embassy was “detained against her will on the street and threatened at length”, a Swiss foreign ministry spokesman said.

He said this was “a very serious and unacceptable attack on one of its diplomatic representations and its employees”.

Switzerland had reported the incident to Sri Lankan authorities, he said, and was demanding an immediate investigation.

It also called for the perpetrators to be brought to justice and for “the guarantee of the security of the Swiss representation in Colombo and its employees to be fully restored”.

The Swiss ambassador to Sri Lanka was said to have “conveyed” that message to the country’s prime minister and foreign minister.

The Sri Lankan ambassador to Switzerland has also been summoned.

The Swiss statement made no mention of the police officer’s asylum case.

The officer, Nishantha de Silva, had earlier been involved in official investigations into criminal allegations, including some against Mr Rajapaksa – claims the president has denied.

The allegations date to the 2005-2015 presidency of Mr Rajapaksa’s brother, Mahinda, who was a key figure in the election campaign and has since been appointed prime minister.

Sri Lanka’s Daily Mirror quoted a government minister, Bandula Gunawardana, as saying the administration was not aware of the incident.

The Rajapaksa family is one of the most powerful in Sri Lanka.

Supporters hail Gotabaya Rajapaksa for playing a crucial role in crushing the Tamil Tiger separatist rebels and bringing to an end Sri Lanka’s long-running civil war in 2009, when he was defence secretary.

Opponents fear the return of the dynasty could spark a new crackdown on critics.

The government has put airports on alert and provided them with the names of hundreds of police officers who might attempt to leave the country.

Several journalists who were critics of the government when the Rajapaksas last led Sri Lanka were abducted, tortured and killed. Thousands of people, particularly Tamils, vanished in what have been described as enforced disappearances.

Earlier this year, Gotabaya Rajapaksa told the BBC that war crimes allegations against him were “baseless”.